Keith Jarrett turns 75 today. For some he is the greatest living musician, the “Vladimir Horowitz of jazz.”

A tenet of my teaching is simply: There are no new ideas, just fresh ways to put together old ideas.

Jarrett ranks with Thelonious Monk, Bill Evans, McCoy Tyner, Art Tatum, and only a few others in terms of a readily identifiable sonority. Smoke and mirrors surround his characteristic “glow.” When I asked him directly about this, Jarrett fell back on the old saw, “You play what you hear.”

EI:  What about touch, and touching the piano?

EI:  You’re someone that gets a certain sound out of the piano. That’s your sound. No one else gets that sound, and I know it’s not the piano. It’s not like you have one special piano. You get that sound; it’s on your earliest records, on whatever instrument, I think even some uprights in some cases.

KJ:  Forgetting the musical content for a moment, if a musician is working on his or her voice, he or she is trying to match what he hears in his head with what he hears when he plays. The only explanation for that difference in sound coming out of the piano is that.

Sonority aside, Jarrett is just like anybody else, he found fresh ways to put together old ideas.

Gary Burton and Keith Jarrett is not a disc I return to often — honestly, for all his incandescent genius, the Jarrett discography has more than its fair share of duds — but there’s one track that is unique in the literature, “Fortune Smiles.”

The Real Book I grew up with included the chart of “Fortune Smiles,” which I suspect is totally accurate to the composer’s original sheet and supplied by Burton himself, part of the same care package containing other Burton pieces reproduced in the Fifth Edition. 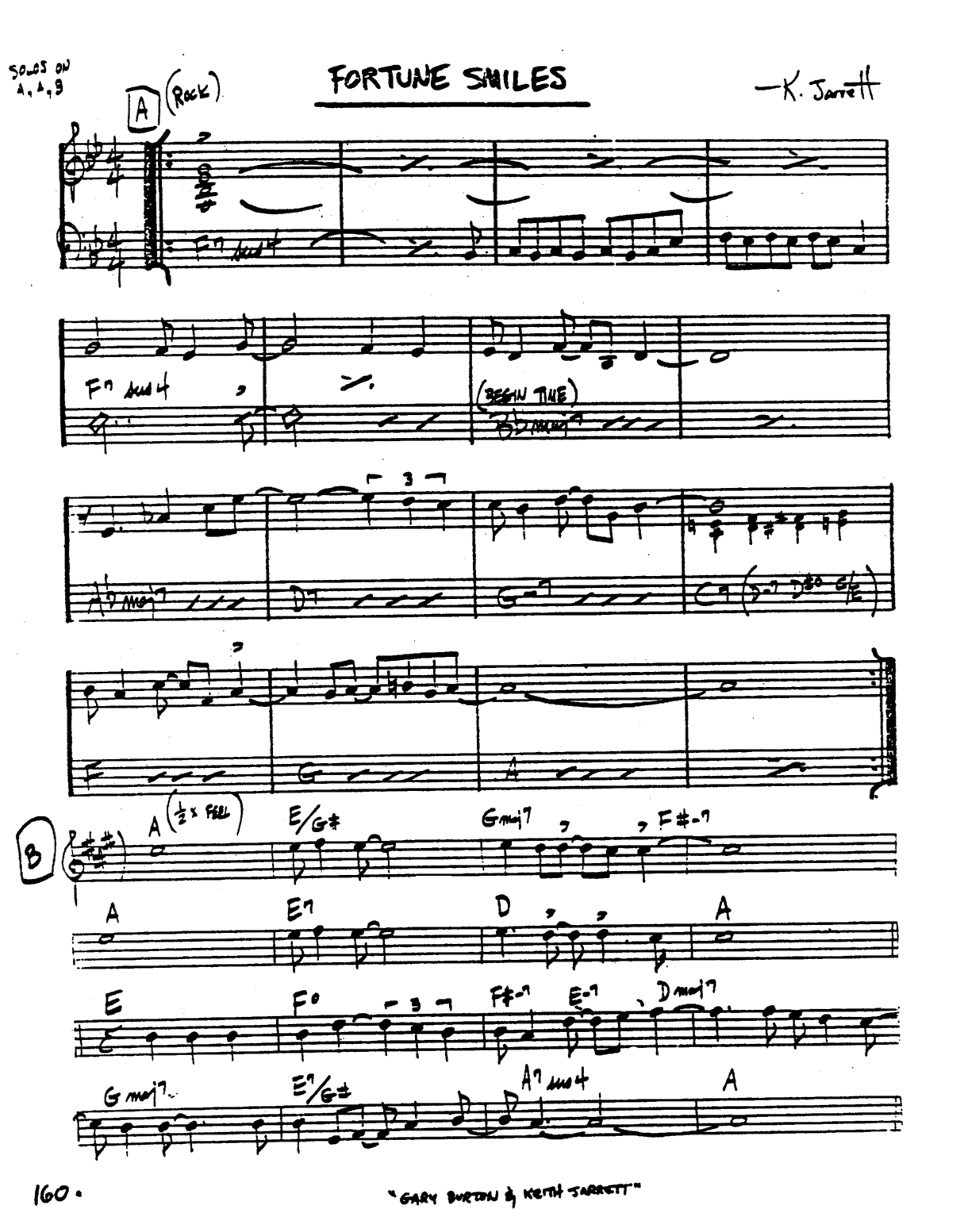 Jarrett plays and intro and outro based on the “B” section. This music — both the composition and the piano performance —  is a pianistic appropriation of the Woodstock era of folk rock/singer songwriter.

Jarrett recorded pieces by Bob Dylan and Joni Mitchell with Paul Motian, who drummed for Arlo Guthrie at Woodstock. A large number of early Jarrett compositions are informed by this style, and he even dared to record a whole album singing and playing guitar, Restoration Ruin. (Talk about a dud…)  I joke that Jarrett’s famous Köln Concert is Joni Mitchell’s Blue played by a classical virtuoso. That isn’t the whole story, of course, but that joke contains a grain of truth.

The “A” section of “Fortune Smiles” is the latest style of modern jazz-rock circa 1970. It’s fairly middle-of -the-road. If I saw the chart of the “A” section of “Fortune Smiles” without knowing it before, I couldn’t guess if it was by Jarrett, Burton, Chick Corea, or somebody else writing that kind of thing at the time. (The bassist on the date, Steve Swallow, has written more durable music in this genre than most.)

Burton solos on the “A” and “B’ sections, which is fine, but things get notably more interesting in the piano solo, which jettisons the song for a free jazz freakout. WHAT! The first time I heard this, an electric current went straight through my body. (It is easy to draw a line from this moment to various tracks recorded by the Bad Plus.)

Jarrett plays at a high level during the free section of “Fortune Smiles” and the band (Swallow and Bill Goodwin) has good musicians, but Jarrett is most inspired at this kind of thing when joined by his American Quartet of Dewey Redman, Charlie Haden and Paul Motian.

At it’s best, the American Quartet is some of the greatest music of the era. Pat Metheny suggested it was the group that took over the mantle of the John Coltrane quartet. I wouldn’t go that far, but it certainly informs of what I loosely think of my peer group, not just Bad Plus but Bill McHenry, Ben Street, Kurt Rosenwinkel, Mark Turner, Guillermo Klein, and so forth. We all love that band. If you are studying my peer group, the American Quartet will give you some of the references.

In my academic role, I would stress that all the members of the American quartet were interested in really old music as well as really new music. Dewey Redman was an old-school Texas tenor, an R ‘n B honker. Charlie Haden was a hillbilly country bassist. Paul Motian played clunky swing-era drums. (Tom Harrell told me he thought Motian sounded like Baby Dodds on Bop-be, the quartet’s jazziest record.)

Jarrett himself played Bach and Beethoven, of course, but Keith is also one of the few modern jazz pianists to write a novelty rag, something next door to Scott Joplin, Zez Confrey, and Earl Hines. (Jaki Byard and Roland Hanna are two others that are on this “modern stride” continuum with Jarrett.)

Keith, Dewey, Charlie, and Paul learned old music, they learned the latest music (notably Ornette Coleman’s approach — indeed, Ornette himself is unthinkable without Charlie, and Keith got a lot of that tradition from fellow pianist Paul Bley, who worked with Ornette) and then they put together stuff from all those sources in a relaxed and contemporary way. Sounds easy, no?