David A. Graham (who wrote the centennial piece in the Atlantic) drove us an hour and a half to Rocky Mount, the birthplace of Thelonious Monk. 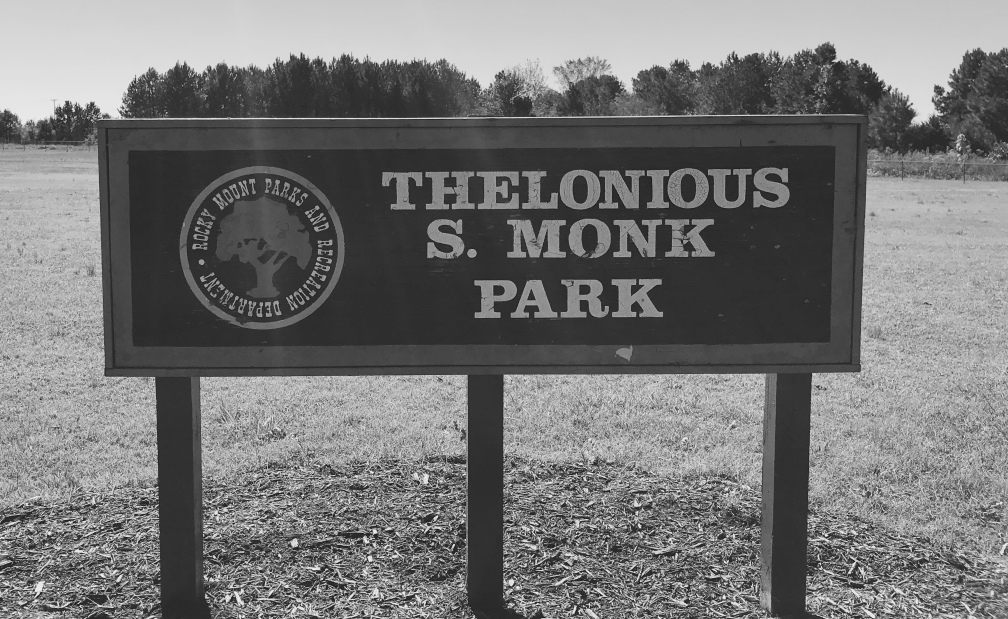 Yeah, we took this selfie. 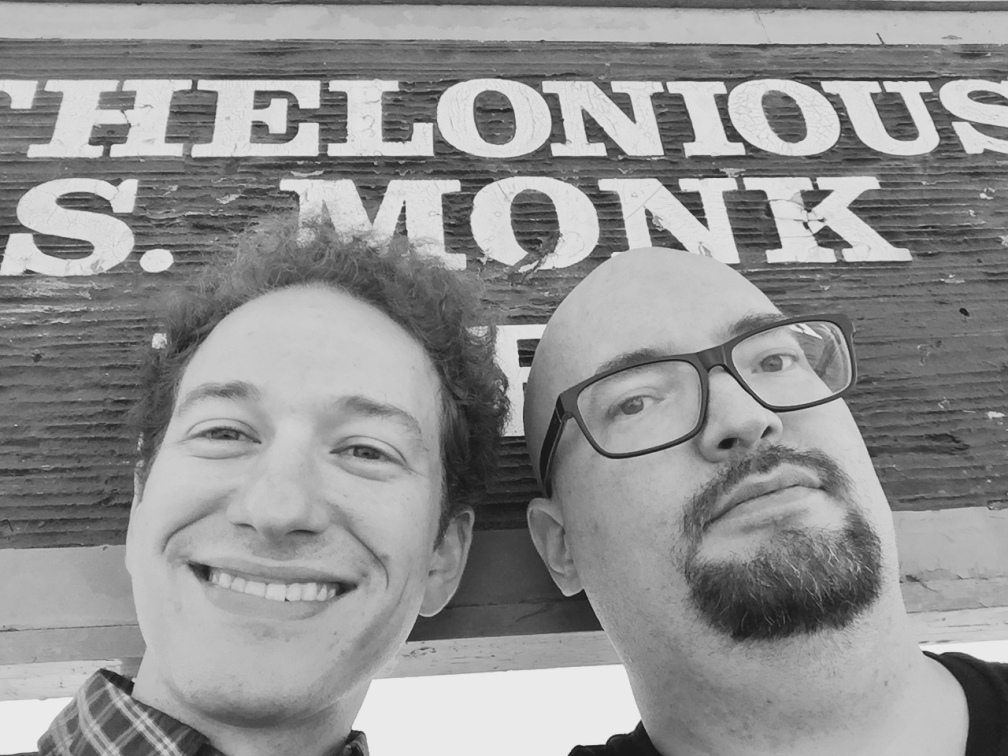 David pointed out, “How the hell does this sign not say, ‘Park closes ‘Round Midnight?’”

The park is within a block of the location of the house Monk lived in until he was five. It is right by a major train junction. In the following pic you can see the active trains right next to the park.

This plaque just went up for the centennial.

Down the block from the park, South St. was renamed Monk St. in 2012. Cover of David A. Graham’s album, Monk at the Crossroads. 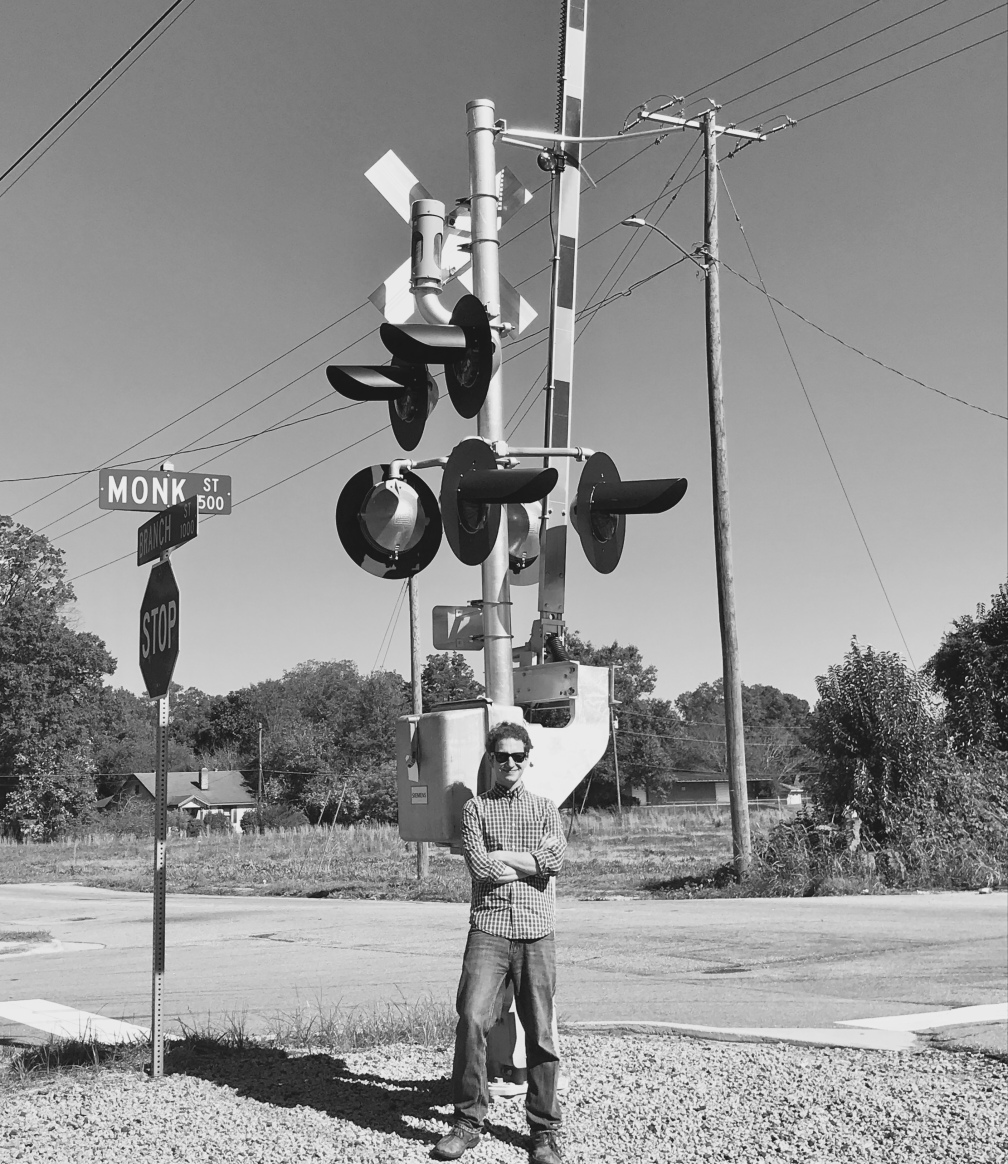 Cover of my album, Monk Street. 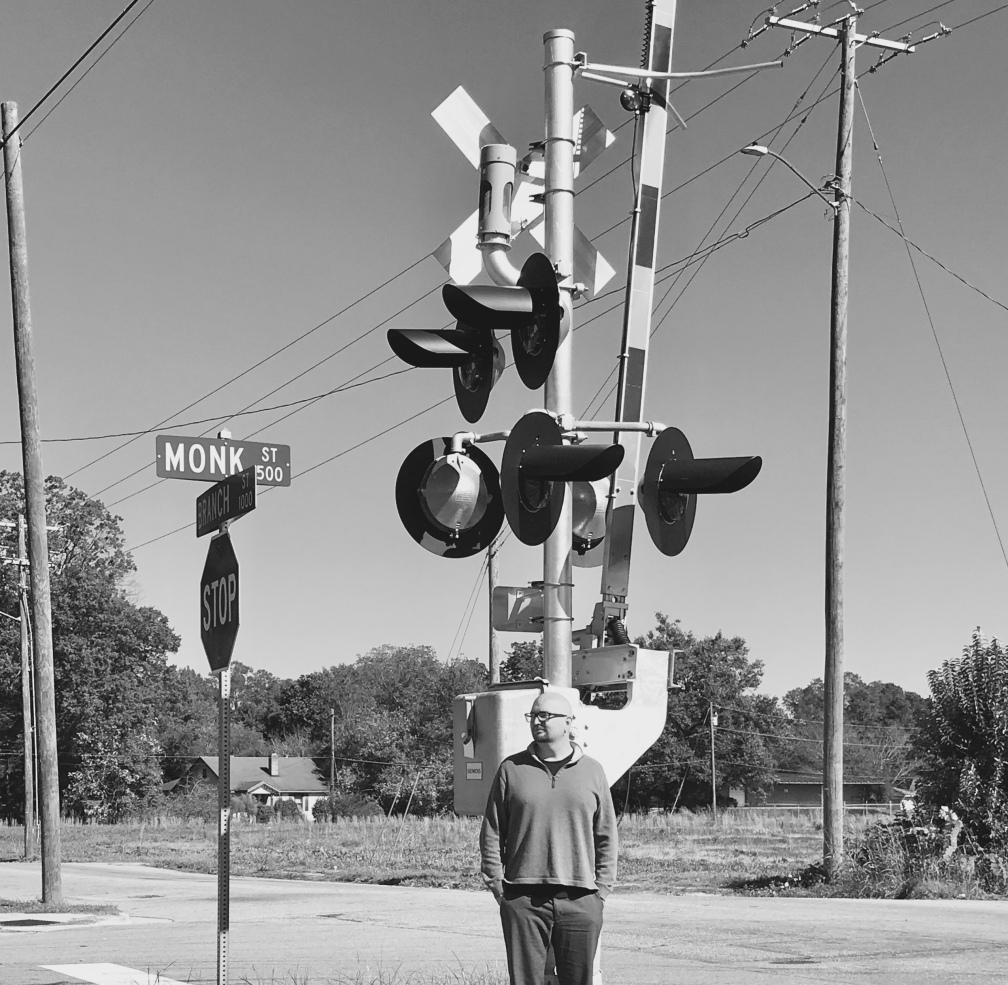 I had emailed Sam Stephenson (who  wrote the definitive article on Monk’s 1970 return to North Carolina, “Thelonious Monk: Is This Home?”) in order to help us find our way around.

Sam has a new book out, Gene Smith’s Sink: A Wide-Angle View,  which connects the dots to a lot of Sam’s interests, including piano genius Sonny Clark. This photo is for Sam. 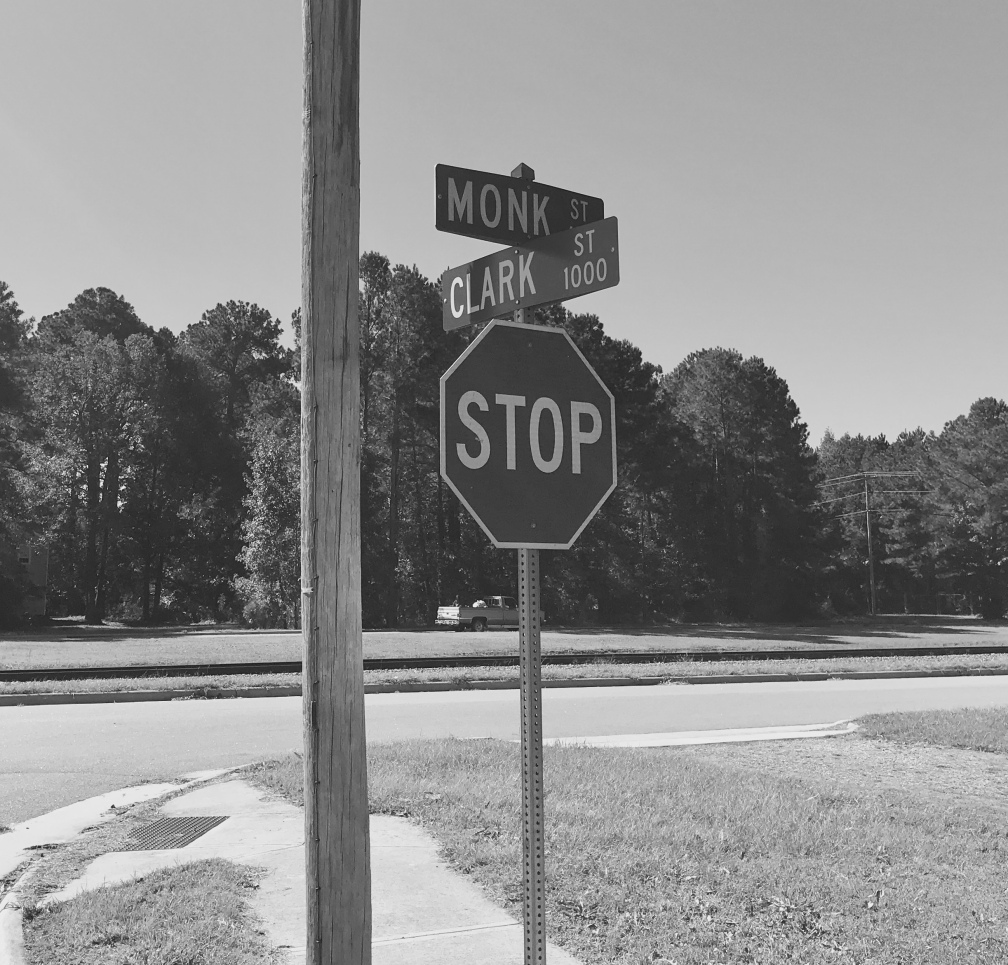 In the center of town there’s a small plaza with a highway marker. Again, thanks to James Wrenn of The Phoenix Historical Society, a key player in making these recent commemorations of Monk in his birthplace happen. 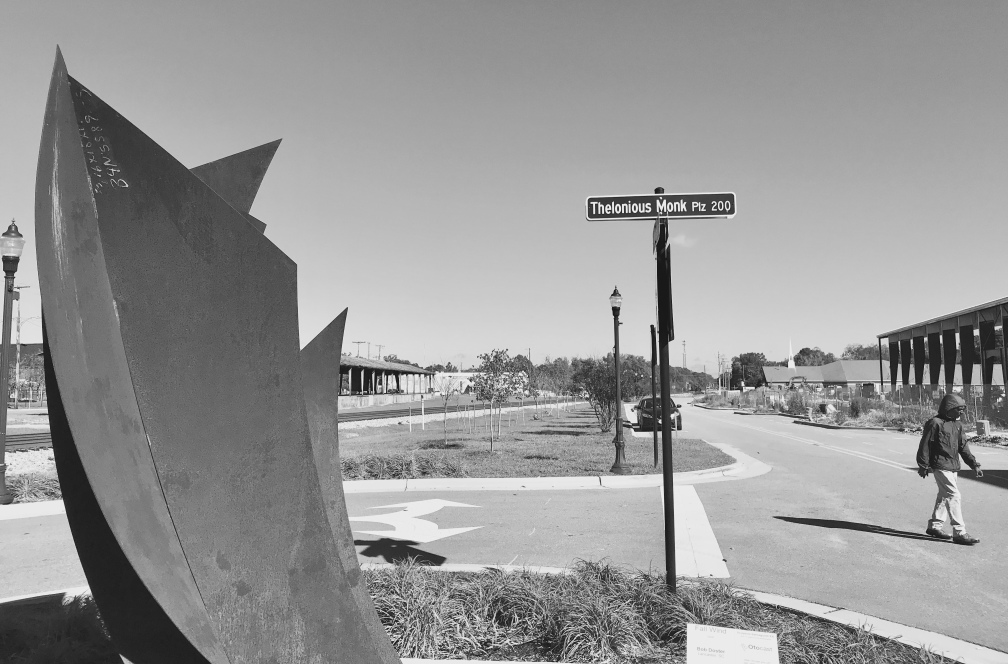 The art is “Fall Wind” by Bob Doster, unconnected to Thelonious

Nearby there’s the Prime Smokehouse, which boasts excellent barbecue and further connections to jazz. 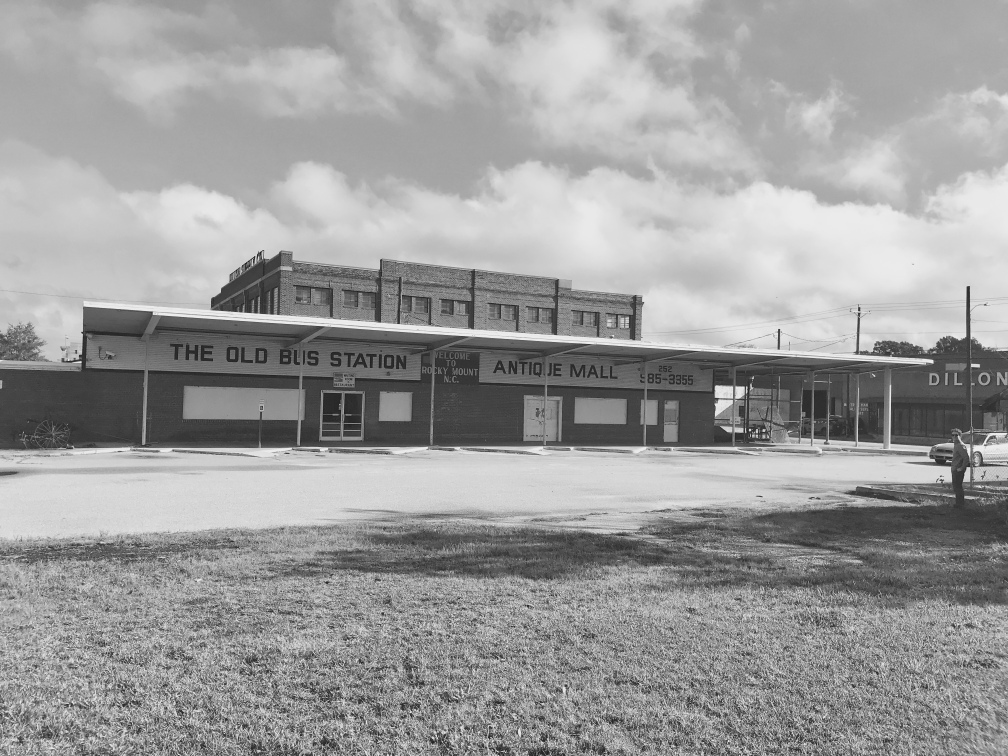 Back at the gig that night at Durham Fruit and Produce: Houston Person and Chris Potter guested with David Williams, Victor Lewis, and me. While separated by almost 40 years in age, both tenor masters are from South Carolina and both command the audience.

Monk’s music can be looked at from so many delightful angles. If Kris Davis or Tyshawn Sorey participated in the most abstract gigs at MONK@100, then this two-tenor winner will probably rank as the most grounded. Houston says that jazz must be dance music, and Victor knew to bring the backbeat when things got heated. At times the saxophones riffed together and the stage seemed to levitate. I couldn’t stop smiling.

Houston took the first solo on “Ba-Lue Bolivar Ba-Lues Are.”  He was wearing his glasses in order to read the tricky melody, and began blowing with the eyewear still on. However, after a few perfect blues phrases, Houston paused. He slowly took off the glasses placed them in his breast pocket while the rhythm section ticked over. (The thought bubble over Houston’s head read, “I got this.”) Then he recommenced laying down the law.

Another highlight was Chris’s incredible closing cadenza on “Ask Me Now.” Actually Chris was a very important part of the gestation of MONK@100. I played a week in Potter’s quartet with Larry Grenadier and Eric Harland. All the music was good but Monk’s “Four in One” was a real highlight. It was an easy win: In order to create great jazz, I just needed to play the right voicings while Chris blew virtuoso tenor and the rhythm section swung out. No overthinking was required. When Aaron Greenwald asked me what we should do for MONK@100, I remembered that gig and said, “Let’s get the best tenor players we can find.” We had four slots and asked six. Branford Marsalis (who could have easily driven from his house to the gig) couldn’t make it, but everyone else said yes. That’s why we put Houston and Chris on the same show, and — wow! —  it really worked out.