Halfway through an evening of comedy, Victor Borge would pause and offer a kind of quick commercial related to his inability to properly play the instrument onstage:

“Ladies and Gentlemen, the Steinway people would like me to announce that this is a Baldwin piano.”

The hedge fund founded by John Paulson, Paulson and Co., owns Steinway pianos. Paulson has supported Donald Trump for some time and was recently named an economic adviser to Trump. As far as I know, this post is the first to make the Trump/Steinway connection explicit to an arts audience.

It is also the right place  for a few words about former CEO Michael Sweeney, who oversaw the recent revitalization of Steinway, loved jazz and art, but left because he and Paulson couldn’t get along.

This past spring Steinway and Sons opened a beautiful new showroom just north of Bryant Park. Piano mavens mourned the loss of the old building on 57th street (“where Horowitz first played for Rachmaninoff!”) but insiders were actually cautiously enthusiastic about the palpable currents of reinvigoration coming from the staid standard bearer of excellent pianos.

Jazz musicians were especially excited, because Steinway’s CEO Michael Sweeney was obviously interested in diversity. When I met Sweeney late last year I was rather dumbfounded to be in the presence of a major corporate player who was always talking about artistic exploration and achieving excellence by any means necessary.

Sweeney had been a successful entrepreneur in a variety of situations but this was his first time working with an instrument company. He sure seemed to catch on fast. You could ask Sweeney anything about pianos and he had a detailed answer at the ready. He loved the factory in Astoria and all the legendary workers there.

At the opening night showroom gala, Yuja Wang played. A safe choice: she’s awesome and very popular. Sweeney introduced her as “one of the top classical pianists in the whole world” and he wasn’t wrong.

The other musical guests were a duo of Jason Moran and Robert Glasper. To my jazz readers that may seem also like a safe choice, but actually at a classical event this was rather radical. At one point Glasper got up and asked for a wine glass from the front table. He proceeded to stick the glass straight into the innards of his instrument — undoubtedly one of the “top pianos in the whole world” — possibly in part to prove that the more street-wise elements of Houston were representing at this frankly rather absurd gala for the 1%. (There was good musical reason for the wine glass as well: Glasper got a nice percussive sound from it.)

Sweeney was responsible for the programming of the gala, and he wasn’t just having a one-night stand with jazz, either. Sweeney was taking his time and learning more about the scene. At his suggestion, the two of us went to see Craig Taborn at the Jazz Gallery where he showered enthusiastic praise on Henry Threadgill when we were all in the elevator together.

Steinway is eagerly hawking the Spirio these days (mentioned in the Hamptons article above, the item J. Michael Evans wants to sell “to the Chinese, online.”) The Spirio is a fabulous toy for the ultra rich: a concert piano with a computer inside that reproduces a live pianist “exactly.” It’s a profound 21st-century upgrade of a player piano.

Sweeney explained to me: “A concert pianist will take two years with us picking out their B. It’s a once in a lifetime purchase for them, and we are delighted to take the time with whatever they need, that’s what Steinway is for. With the Spirio, though, a businessman walks in, sees the demonstration for 10 minutes, and writes a check for $110,000 on the spot because he’s buying for his mother or his kids.”

Sure enough, that weekend when I was at the Met Opera, the program had a prominent ad for Spirio for Mother’s Day. I mean, if you love your Mother, surely she deserves a Spirio!

To his credit, Sweeney was eager for his artists to figure out reasons for the Spirio to exist unrelated to the upscale market. Those “art” reasons aren’t entirely obvious, because the sound of Tatum or Horowitz coming out of the Spirio is less exciting than Tatum or Horowitz on record, simply because the soul isn’t present. Still, there is surely potential in the Spirio for creative exploration — Glasper and Mark Bradford got a shot at an unprecedented collaboration — and as an educational tool the benefits are manifold. Watching the keys move is especially mesmerizing when it is a jazz performance, perhaps recalling the days when everyone had to learn James P. Johnson’s “Carolina Shout” from a player piano.

My own tentative idea for Spirio was to transcribe and record some classic boogie woogies by Meade Lux Lewis, Pete Johnson, Albert Ammons, Jimmy Yancey, and Big Maceo Merriweather. I’d make formal scores suitable for classical musicians eager to replace that silly Morton Gould “Boogie Woogie Etude” with something more authentic. At any rate it would be great practice for me and a way to shine a light on master American musicians rarely mentioned around high-end pianos. Perhaps I could record into the Spirio accompanied by a fabulous drummer to help me swing harder and give the (drummerless) final track another kind of mysterious human element.

I suggested this to Sweeney, who immediately asked, “Which drummer?”

“Great. He’s a Ludwig artist, and we need some good drums in the building anyway. Let’s get a set he likes and keep it around.”

The CEO of Steinway was saying his offices needed a good set of drums on hand! This may seem like nothing much, but trust me, this was a revolution.

Well, hopefully that revolution will continue and Sweeney’s ideas will still have sway at the company, but Sweeney isn’t at Steinway anymore. Last week he moved on, citing differences with the owner, John Paulson.

At the opening gala, John Paulson’s speech was comprised of the kind of self-congratulating “Wow, we’re great!” material that is standard issue from most rich people who appreciate rare art mainly for exclusive status and commercial potential. That didn’t bother me, because God knows us artists need our corporate sponsors. However, afterwards a friend warned me that there was a dark side to Paulson’s hedge fund activity before the housing crash.

There are those that don’t regard a fervent lefty like Matt Taibbi as a flawless source. Indeed, for many financiers, Paulson is essentially a hero for bucking the odds and betting against the house. The 2009 Devin Leonard New York Times review of Gregory Zuckerman’s The Greatest Trade Ever: The Behind-the-Scenes Story of How John Paulson Defied Wall Street and Made Financial History is compelling, perhaps especially in conclusion:

At it turned out, Paulson has gone on to be a serious philanthropist, with massive gifts to the Central Park Conservancy ($100 million) and Harvard ($400 million), although neither of those benefactors were “on the wrong side of his trades.” (Both gifts had pushback from the left, with Malcolm Gladwell tweeting amusingly about the latter.)

There also is an argument that Paulson’s involvement with Steinway is almost a kind of philanthropy. Steinway seems genuinely committed to excellence first and foremost. Some say their current pianos are better than ever. I’d doubt that Paulson himself is overseeing it all personally, making sure that only the finest materials are on hand while crafting this most deluxe of tools, but he certainly hasn’t done anything to harm the brand. Considering how often a new corporate owner destroys the value of a beloved arts or entertainment icon, “not harming the brand” is actually doing a great job.

(I’m curious to see how this all goes forward without Sweeney around. In the timeline, Sweeney got there before Paulson and he was promoting the artistic mandate before the purchase by Paulson and Co. On the other hand, while I was obviously impressed with Sweeney, I have no idea if Sweeney was really doing a good job as CEO for the company in general.)

As we all know, the politics around big money are usually pretty bad. In music, probably most of the major instrument makers, record labels, festival production companies and colleges make corporate decisions that range from mediocre to despicable when considered in strictly humanitarian terms.

Still, getting into bed with Donald Trump crosses a line. Recently I wrote my community in the newsletter Floyd Camembert Reports: 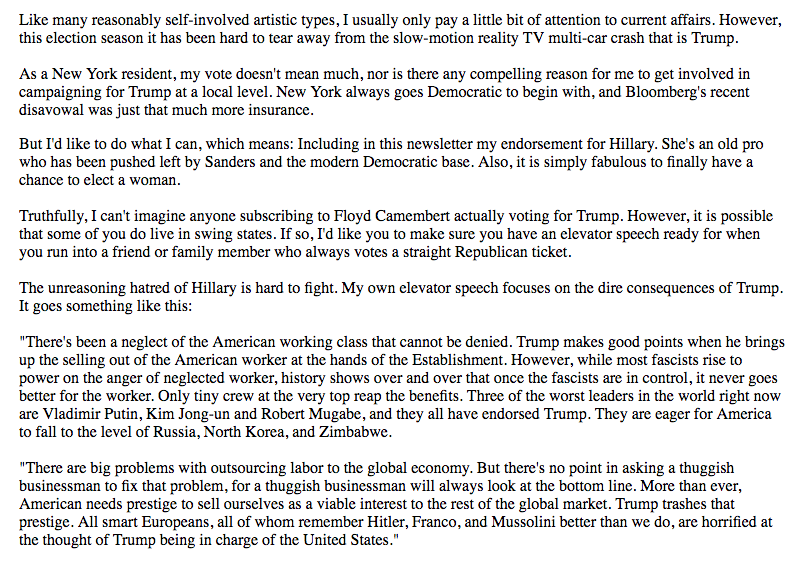 When Paulson bragged about buying Steinway in the New York Times, he sounded like Trump. It’s easy to see how they might get along: 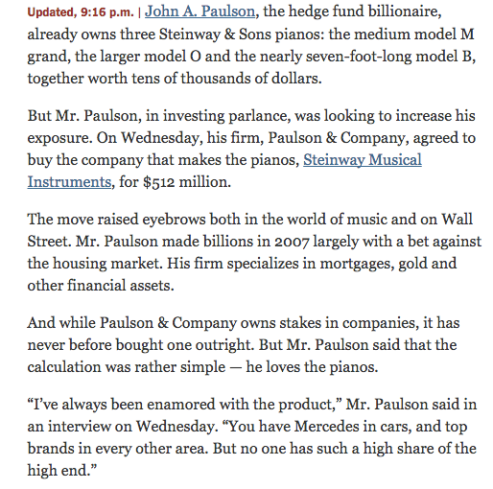 With the Paulson/Trump alliance in full effect, I can’t in good conscience keep asking promoters to go out of their way to provide me with Steinway pianos.

(Update, November: Now that Trump is President-Elect, I do call on a consortium of high-profile Steinway artists to join forces and repudiate that relationship. You can play your Rachmaninoff concertos on new Fazolis, Yamahas, and Bosendorfers — and of course older Steinways — just fine.)

As a bohemian jazzer it is easy enough to go back to cheerfully accepting what’s in front of me every night with equanimity. In the end, a piano is just a tool. Whenever I’ve been confronted with a bad instrument, I’ve asked myself, “Would this low-grade tool stop Thelonious Monk, Bud Powell, or Paul Bley from creating miraculous human art?” (I know the answer is “no,” because some of their greatest records were made on terrible pianos.)

While on verge of becoming a full-scale Steinway artist I enjoyed some nice privileges, like getting a cheap rate for a magnificent D for the latest Bad Plus record It’s Hard and a good deal for my nice Boston at home. However, the piano on TBP’s Made Possible is a top-notch Yamaha, and it surely does the job. In fact, many of our fans think that is our best record.

As of today, it seems that Trump is doing everything he possibly can in order not to get elected, so perhaps I’m overreacting. But I do think my fellow pianists should at least be aware of this jarring dissonance at the top end of Steinway’s (pay) scale.

After all, while we all love beautiful things, part of our greater worth is the company we keep.

(UPDATE, a few days later: In interviews, reporters have been eager to nail down my relationship to Steinway. Was I a Steinway artist? To clarify: No, I was not. In pre-Sweeney years I was at Steinway picking out pianos only twice for ECM recordings with Billy Hart. The only piano store I had a relationship with for decades was the indie shop Klavierhaus, who supplied a few Faziolis to gigs and a Steinway for the TBP Rite of Spring record. Gabor Reisinger was my friend there, and sadly and shockingly he passed away at a very young age.

A year and a half ago Sweeney attended a night at the Village Vanguard where I played with Jason Moran, Stanley Cowell, Kenny Barron, and Fred Hersch. Sweeney wondered why I was the only one onstage who wasn’t a Steinway artist and gave his staff a mild mandate to make me one. He also became personally friendly with me and began bending the rules so that I would have Steinway benefits.

However, no one can become a Steinway artist unless they own a Steinway. I went to the factory but couldn’t afford the Steinway I really wanted, so I settled for a Boston, also thinking I would save up and trade in for a real Steinway in a couple years. Sweeney told me I could ask for pianos whenever I wanted for gigs and recordings, so I expected everything to be gravy.)