The historic church that gives the St Endellion festival its name is located on a spare stretch of verdant plain with hardly anything within hailing distance, not even a pub.

For almost sixty years this church and a few other nearby churches in Cornwall have hosted two weeks of European classical concerts. The St Endellion Summer Festival doesn’t advertise, nor does it need to, as hardly anybody new could get in. The Endellion church fits only a few hundred people, and when there is a bigger production there are almost as many musicians “onstage” as there audience members.

Legendary conductor Richard Hickox was very important to the Endellion festival. His son, Tom Hickox, is currently the chairman. Tom also sings in the choir and rings the bell signaling the end of the intermission.

It seems reasonably certain that there’s no other music festival where the chairman pulls the triple duty of admin, vocalist, and usher. But multi-tasking is a feature of Endellion. Before the first performance of Billy Budd, our plates from the group meal was cleared by the tympanist.

There are no big hotels, little parking, and plenty of living rather rough in the inevitable Cornwall mud, but a general air of free-spirited fun is palpable even when groupthink is making sure the dozens of people with various events all over the map have appropriate transport.

Nobody is paid, or at least paid nothing to speak of. The band, the singers, the staff, the occasional major guest star: They all do it for the love of music and the love of community. 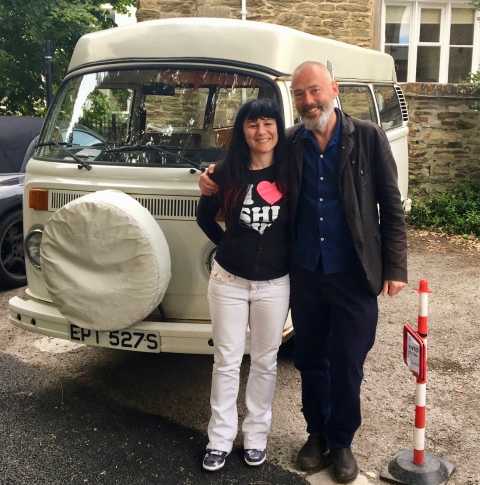 European classical music usually demands fancy digs in order to put on a show, but Endellion’s austere circumstances don’t harm the playing. Indeed, there is a special magic that comes from performances lacking conventional transactions like money or career placement.

On the train ride down from London I studied the score of Verdi’s Requiem while listening to a recording made by “stars.” The solo singers had some good moments but at many points they were just trying to one-up each other.

That night in the Truro cathedral I heard Verdi’s Requiem done by Sophie Bevan, Madeleine Shaw, David Butt Philip, and Matthew Brook with the Endellion orchestra and chorus conducted by Ryan Wigglesworth. The audience was at capacity at around 400. Usually a Verdi Requiem is done in a much bigger hall. It was an honor to be so close — and the solo singing was much better than on that “star” recording. Sarah said this might have been the greatest concert she had ever attended.

In no way am I suggesting that musicians shouldn’t generally get paid. They absolutely should get paid! But in conversation with the participants, many said the Endellion weeks were an opportunity to remember why they were in music to begin with and a chance to recharge their batteries for the difficult freelance year ahead.

The elite and moneyed side of European classical music is a problem. The appearance of flashy cash and status unquestionably keeps some novices away. Donald Trump, apparently determined to lash out and harm everyone he can, threw European classical music fans under the bus a few weeks ago with the (incorrect) assertion that European-based culture is better than other cultures: “We write symphonies!” he blathered.

I’m sure Trump couldn’t differentiate between Mozart and Mahler. What Trump likes about the idea of European classical music isn’t the craft, but the money and cheap prestige.

And, regrettably, he’s on to something. This passage from Janet Malcolm’s recent New Yorker profile of Yuja Wang is telling:

Newbanks told me that it is customary for management to take twenty per cent of a soloist’s fee and fifteen per cent of a conductor’s fee. I asked him, as I had asked Yuja, what her fee was, and, like her, he wouldn’t tell me. “No one in the business talks about it,” he said. The business evidently exacts a vow of omertà from its members. Newbanks laughingly (perhaps a little nervously) said that Yuja had alerted him to my unseemly interest in money. When I put the futile question to her, she had answered, “I don’t usually like to talk about fees,” and added, with uncharacteristic humorlessness, “I feel it is degrading to art to measure it with money.”

“I feel it is degrading to art to measure it with money,” is easy enough to say when a whole team of capitalist experts are working to make Wang and team as much loot as possible! The sums must be staggering. Wang is fabulous, she deserves a healthy living, but artists should never be in the 1% bracket. (That side of things is part of why I came out against Steinway when I learned that Steinway’s owner was going to be a Trump advisor.)

so for the right accompaniment I brought along The Rings of Saturn by W. G. Sebald, a stream-of-consciousness set of historical reflections prompted by an epic walk in Suffolk. At one point the narrator meets a Dutch farmer in an English hotel:

It was Cornelis de Jong who drew my attention to the fact that many important museums, such as the Mauritshuis in The Hague or the Tate Gallery in London, were originally endowed by the sugar dynasties or were in some other way connected with the sugar trade. The capital amassed in the eighteenth and nineteenth centuries through various forms of slave economy is still in circulation, said de Jong, still bearing interest, increasing many times over and continually burgeoning anew. One of the most tried and tested ways of legitimizing this kind of money has always been patronage of the arts, the purchase and exhibiting of painting and sculptures, a practice which today, said de Jong, was leading to a relentless escalation of prices paid at major auctions….At times it seems to me, said de Jong, as if all works of art were coated with a sugar glaze or indeed made completely of sugar, like the model of the battle of Esztergom created by a confectioner to the Viennese court, which Empress Maria Theresia, so it is said, devoured in one of her recurrent bouts of melancholy.

The world of “fine art” seems almost hopelessly tainted by big money at this point. If European classical music hangs on with at least a little bit of general credibility, it will hang on partly because it is transient and must be experienced in performance. The Endellion festival is a model of how to keep the music relevant through sheer love of the sounds, the craft, and the community.

Alex Ross makes a strong case for the pairing of Sebald and Benjamin Britten, especially since both lived many years in the same melancholy part of England. At Endellion Sarah and I got to experience the dress rehearsal and two performances of Britten’s Billy Budd. Three Billy Budds in a week! Sarah went the extra mile and read the Melville original as well. In the evening we would discuss the complex themes of the opera with Padmore and Budd himself, Roderick Williams. (Talk about a dream vacation…)

In opera there is the possibilty to “create a role.” There are three leads in Budd. In addition to Williams as Budd and Padmore as Captain Vere, John Tomlinson was John Claggert, the Master-of Arms. Three extraordinary singers, three extraordinary roles. On a postage stamp you could write, “Billy Budd is the story of unintelligent good versus machiavellian evil,” but along the way Britten offers a chance to engage with love, death, patriotism, honor, poetry, history, dominance/submission, and much more. I must have put in about six hours of verbal analysis as to Claggert’s motivation…And when I checked with others, they were all talking about about it, too.

Britten wrote much more valuable instrumental music than Verdi, Puccini, or Wagner, but his magpie sensibility is most perfect for drama. One night I provoked a discussion among the singers about the best Britten operas. Later I learned that discussion went on after I went to bed and even continued into the next day’s rehearsal.

Naturally, English music in England is a good fit. In another Endellion concert, we heard Holst’s delicately orchestrated and thoroughly gorgeous Choral Hymns from the Rig Veda.

There was quite a lot of harp about. Olivia Janguers was brilliant in the many exposed harp passages of Billy Budd. Elizabeth Bass showed me a bit of how that mysterious instrument works.

Another highlight was Ryan Wigglesworth’s own “medley” of Götterdämmerung (he joked that it was a “premiere”) culminating with Brünnhilde’s Immolation Scene sung by the amazing Rachel Nicholls. We don’t ever expect to hear a Wagnerian soprano in such a small space ever again.

Most artistic directors take time off once the festival is underway. Despite performing Captain Vere on three nights, Mark Padmore was at every Endellion concert. Padmore explains some of his passion for live music in an article about the St John Passion in the Guardian:

There is something distorted – one could say, dysfunctional – in the relationship between classical music and recordings. Pretty much the entire repertoire was written for live performance – indeed most of it was written before recording was invented…

….We probably notice if something goes wrong but otherwise we can essentially allow a performance to remind us of what we think we know already. We hear, but we don’t listen…

…People pull out obscure vintage recordings in the way that someone might show with a vintage wine. This is where the record collection resembles the stamp collection – music becomes a possession rather than a process. The point is, we are in danger of losing touch with the greatest strength of classical music – its liveness. The unrepeatable, unpredictable nature of great music performed in the moment for that moment only.

At the St Kew Church there was an lunchtime concert of the Brahms Sextet in G major, a masterpiece of the chamber repertoire that I’d never heard live. It’s fabulous on record. But, as Padmore says, the greatest way to experience this kind of great music is in the moment and for that moment only.  Clio Gould, Jonathan Morton, Robert Turner, Steve Doman, Tim Gill, and Joely Koos gave us the gift of a living Brahms, and that gift was rapturously received.

In the introductory note to the Endellion program, Padmore writes,

Music essentially comes from community — at best it is a form of conversation, one that involves listening as much as speaking. St Endellion is an outstanding example of music-making inspired and nourished by friendship — where barriers between performers don’t really exist.

Amongst my many unforgettable Endellion memories is watching Roderick Williams clear away chairs after singing the lead in the final Billy Budd. At first my reaction was unadulterated horror: “What the hell is Roddy doing, cleaning up the church after reducing us to tears? Who’s in charge of this blasphemy?”

But then I came to my senses and shifted a few chairs myself.