New at the New Yorker Culture Desk: Wayne Shorter in 1964. 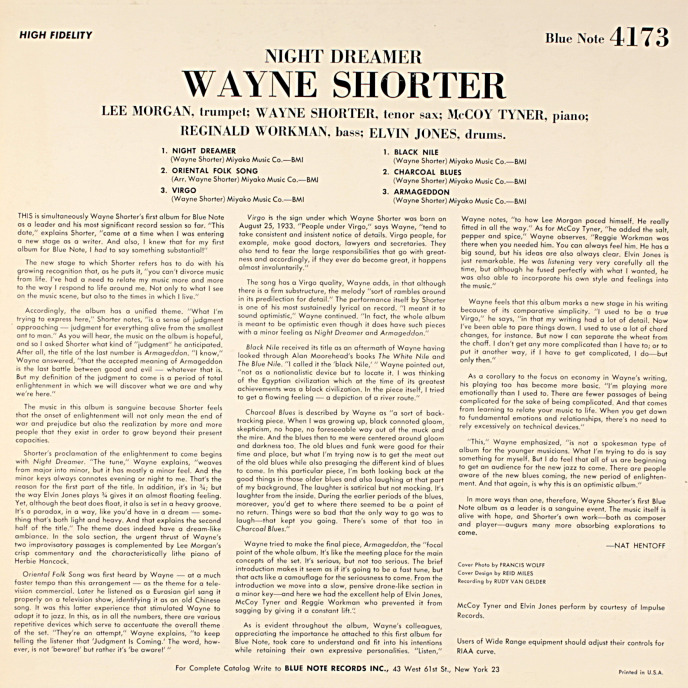 A few hyper-musicianly extras that didn’t make the final cut of the essay:

The signature Messengers piece is Benny Golson’s “Blues March,” which combined military drums, the blues, and the quick melodic rhythm called the “Scotch snap.” “Blues March” is on Blakey’s breakout record Moanin’ with Lee Morgan; a few years later Shorter began playing it every night on tour. “Charcoal Blues” has that same “Scotch snap.” On the out chorus, Jones marches with four on the snare, a rare example of Jones obviously imitating Blakey.

It’s unclear how much and in which ways Coltrane and Tyner inspired each other in terms of specific harmonic information. In one interview with Bob Dawbarn, Coltrane said, “Tyner plays some things on the piano, but I don’t know what they are.” For the big band album Africa/Brass, Coltrane told his arranger Eric Dolphy to get the voicings from Tyner. Unfortunately, the record label Impulse! did not credit Tyner for creative input. (Adding insult to injury, the jacket listed the pianist as McCoy Turner.) To this day, Tyner might not get enough recognition for his monumental contribution to reshaping jazz harmony. He celebrates his 80th birthday in December.

Night Dreamer begins with the title track, a waltz with Tyner and Jones. One could even argue that “Night Dreamer” is Coltrane’s “My Favorite Things” cut with some hard bop. The pentatonic “Oriental Folk Song” also suggests Coltrane and Tyner, and helps clarify how much these musicians were concerned with “world music.” For “Black Nile,” Shorter explains: “I was thinking for the Egyptian civilization which at the time of its greatest achievements was a black civilization…I tried to get a flowing feeling — a depiction of a river route.”

For Juju, on top of the churn, Shorter plays a mix of simple and surreal. It’s a Coltrane band, the tunes are not far from Coltrane either, but the saxophonist is still “As weird as Wayne.” Some of that surreal quality might come from the intellectual jazz crew of Lennie Tristano, Lee Konitz, and, especially, Warne Marsh. While it is impossible to imagine Marsh playing the music on Juju, the way Shorter follows the thread of an improvised line to a surprising yet logical place is far closer to Marsh than Coltrane. (Marsh’s favorite saxophonist was Lester Young, a shared reference with Shorter, who wrote “Lester Left Town” for the Jazz Messengers after Young died in 1959.) The earliest Shorter solo on tape, “What Is This Thing Called Love?” from 1956 with pianist John Eaton (unreleased commercially) sounds quite a bit like Warne Marsh. It is included with the DTM Wayne Shorter interview.

On the modal pieces within Sketches of Spain and Kind of Blue the scales relate to each other in a kind of chromatic and sensuous way, just like Debussy and Ravel. This kind of romance was to some extent rejected by McCoy Tyner, whose innovative modal harmony somehow seemed to bypass early 20th century European composition in favor of something more purely rhythmic. Davis wasn’t too pleased about Tyner’s choice, even saying in an interview, “I don’t like the guys who make a livin’ playin’ in the mode…McCoy used to just bang around, and I couldn’t stand that.”

Shorter joined Gil Evans, Bill Evans, and Herbie Hancock in their admiration for Debussy and Ravel, but he also had other sources for harmony. Ralph Vaughan Williams is someone who used complex harmony in a modal frame that seemed more folkloric — perhaps more like Coltrane and Tyner — than Debussy and Ravel.  In The Jazz Ear by Ben Ratliff, Shorter discusses RVW symphonies (“superhero music”) and “The Lark Ascending” (“I’ve been tracking him since I was sixteen or seventeen”).  In the notes to Speak no Evil, Shorter tells Don Heckman, “I was thinking of misty landscapes with wild flowers and strange, dimly-seen shapes — the kind of places where folklore and legends are born.” This description could also apply to “The Lark Ascending.”

In the liner notes to Speak No Evil Shorter compares “Dance Cadaverous” to Jean Sibelius’s “Valse Triste.” Despite beginning with dramatic dark harmony that seems to come from another planet, “Valse Triste” was somehow a popular hit worldwide in the first part of the 20th century (in both the original orchestra version and in the piano transcription). That dark harmony does not fit Sibelius’s full programmatic concept, and soon the composer resolves into more conventional movement. 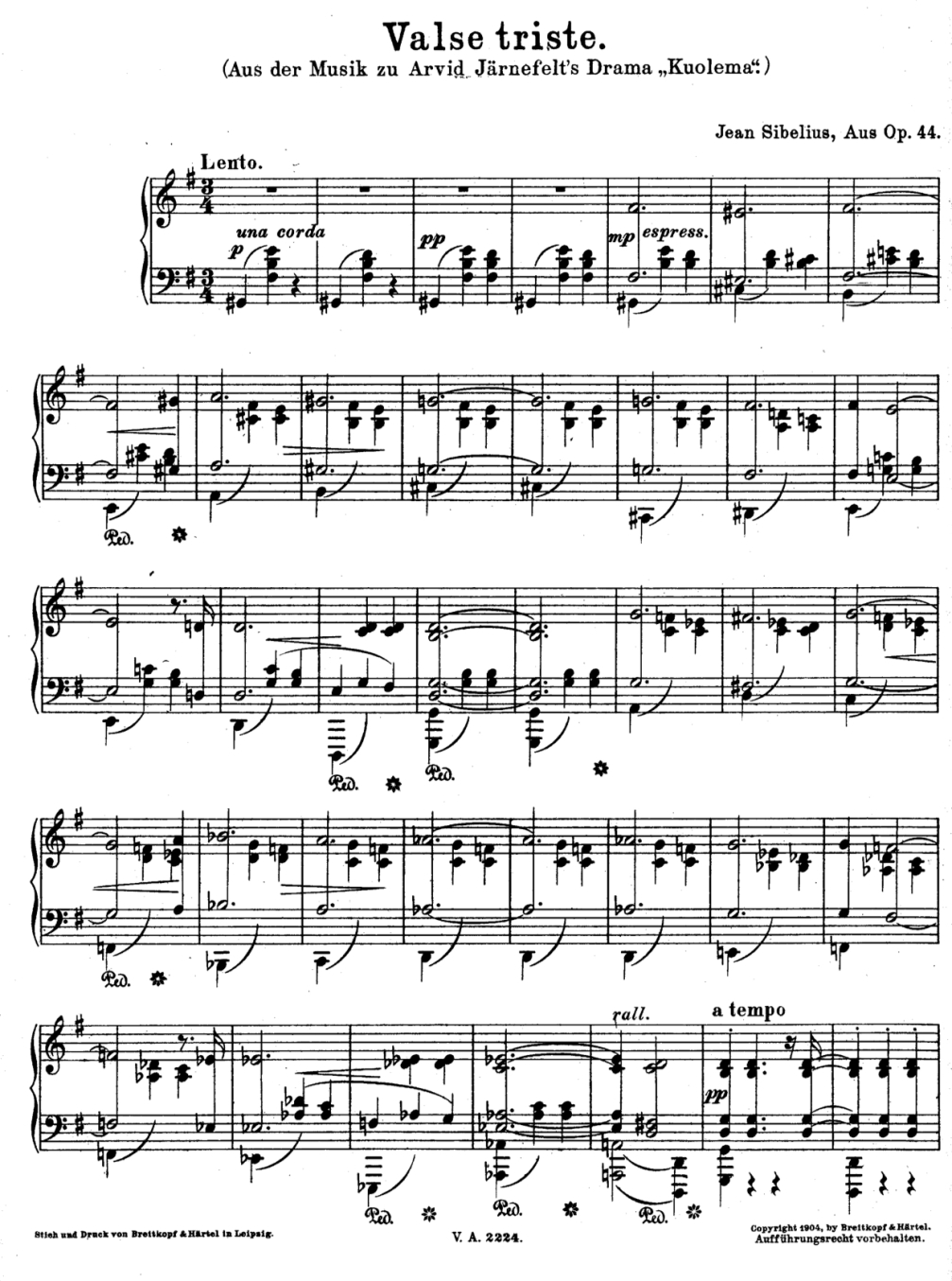 Shorter would go on to record the first phrase of “Valse Triste” on The Soothsayer that replaced Sibelius’s easy G major key cadence with a hard bop minor key shout.

I spent some of late July polling great musicians about their favorite Wayne Shorter record. Speak No Evil was number one and Juju was number two, but there were also significant votes for Night Dreamer, The All Seeing Eye (Shorter’s take on European high modernism), Adam’s Apple and Etcetera (rough ’n ready tenor dates with Hancock), Schizophrenia (a clean and gorgeous straight ahead full band), I Sing the Body Electric (the most experimental Weather Report record), Native Dancer (where Milton Nascimento was introduced to American and European audiences), Atlantis and High Life (diverse fusion projects, each almost symphonic in compositional scope) and the current quartet’s Footprints Live!

Back to my own opinion: Two later one-offs in the Shorter discography that deserve wider recognition are a solo tenor rhapsody on “Thanks for the Memory” from Weather Report’s 8:30 and the through-composed “Terra Incognita” for Imani Winds.

The Culture Desk essay stems back to a first extremely rough draft from about 2000, when I suddenly realized the implications of Shorter taking on different genres in sequence and essentially tried to write about jazz for the first time on a tour bus in Japan. In that embryonic form the essay included the next Wayne Shorter album released as a leader after the 1964 trilogy. 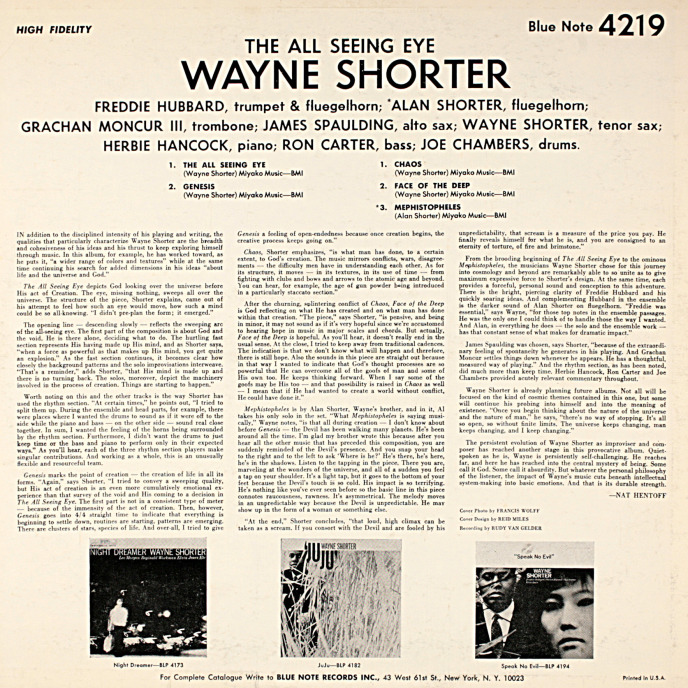 If Night Dreamer is in the style of an Art Blakey album, Juju is a John Coltrane album, and Speak No Evil is a Miles Davis album, then The All Seeing Eye keeps the progression going smoothly further into modernism, especially a kind of modernism influenced by what was at that time comparatively recent European composition. The DTM post Evolution (especially a footnote at the end) digs further into this most obdurate style, which I believe was locally inspired by Sam Rivers and Tony Williams (who got it from Sam Rivers). Shorter is on Grachan Moncur’s Some Other Stuff, which is arguably the most extreme example of this aesthetic.

The “smooth progression” theory is undone by two comparatively conventional but still terrific 1965 Shorter sessions that were recorded before The All Seeing Eye but shelved until later, The Soothsayer and Etcetera.  We don’t know why Eye was chosen for the next release. According to Michael Cuscuna, Alfred Lion had no memory about what was left behind for what reasons.

At any rate, it is all great music. I particularly admire Etcetera which has some notably unfettered Herbie Hancock. The title track also has one of my very favorite Joe Chambers performances. (Overall, the Joe Chambers/Wayne Shorter connection seems very important for The All Seeing Eye, Etcetera, Adam’s Apple, and Schizophrenia. Of course Joe Chambers was a great composer as well.)

In the Culture Desk essay, I note some slight uncomfortableness between Elvin Jones and Herbie Hancock on Speak No Evil; A similar tension (which is probably only about comparative unfamiliarity with each other) can be heard between McCoy Tyner and Tony Williams on The Soothsayer.

An interesting pairing with The All Seeing Eye is Contours by Sam Rivers, recorded the same year with an almost identical line up. In the end I almost like Contours better, mainly because the rhythm section is more settled and deals with the mildly complex blowing forms with effortless abstract mastery. However, The All Seeing Eye takes much greater chances structurally and will forever be a fascinating one-off.