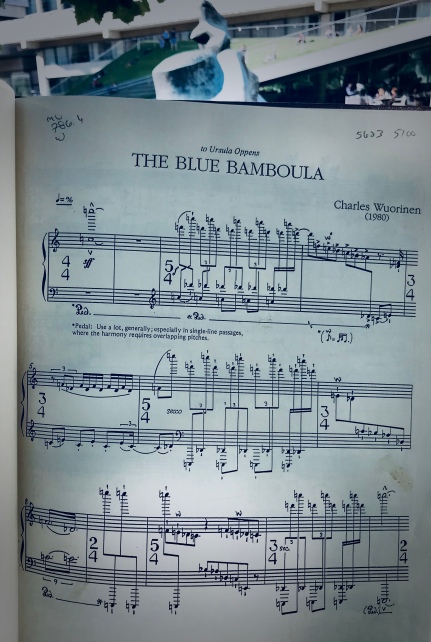 In honor of his 80th (June 9), I’ve written about “The Syncopated Stylings of Charles Wuorinen” for NewMusicBox. Tyshawn Sorey contributed an impressive coda.

My wife Sarah Deming did a great editing job. She’s just the best.

Left on the cutting room floor was a long “background” intro. It took some time and clarified my own thinking but clouded matters in the essay.

I really wanted to get Nadia Boulanger’s name in there, mainly because she’s so important, but also because on June 24 I join Miranda Cuckson at Spectrum in performances of violin sonatas by Boulanger students George Walker and Louise Talma. Indeed, the Talma was a tribute to Boulanger for her 75th birthday.

Well, an important rule in writing is, “Kill your children,” and Sarah was right to convince me to, “Get to the point, already!” But, this is the internet, where unedited words can go on to infinity.  For those that can’t get enough Iversonian musings about 20th century composition, this is that dead child:

Around mid-century that influence was at its peak, going hand and hand with Igor Stravinsky and Nadia Boulanger. Stravinsky found syncopation a natural fit for his cubist phrases, and his “Ebony Concerto” is still the best piece in the conventional European concert idiom written for jazz ensemble. A stunning number of Americans studied with Boulanger, who taught Stravinsky as the greatest modern composer and encouraged Americans to “sound like Americans.” While experimentalists like Henry Cowell were on a different track (where a world music ethos was shaping the rhythmic conception), it remains the exception to the rule to find a valuable conventional American composer working from 1910 to 1950 who didn’t offer a few overt syncopations here and there.

After World War II, the syncopated flavor fell out of fashion, partly due to the discontinuous high modernism espoused by Milton Babbitt and Elliott Carter. From the other side of the tracks, experimentalists like John Cage and Morton Feldman dispensed with meter entirely. By the mid-1960s, many significant new music premieres lacked a perceptible beat.

That tide quickly turned around with the spread of minimalism in the early 1970s, where not just the meter but the harmonic language was made comparatively obvious. In the wake of starkly opposing forces —including the rise of black experimentalists connected to jazz, like Cecil Taylor and the AACM — hierarchies dissolved, and it has gotten harder to make encompassing and inclusive statements about the state of American formal composition ever since. [Ludicrous amount of simplification and generalization ends.]

I also introduced Elliot Carter as a foil but Sarah explained that was too many non-Wuorinen actors. Again, I concede the point. In case the digressive paragraph is of interest for a certain crowd:

There are varying levels of obscurity. Around the time of my Blue Bamboula immersion, I compiled a playlist of a few different performances of Night Fantasies by Elliott Carter. Night Fantasies is another masterpiece, or at least is said to be, and a slew of the greatest new music pianists have recorded it.  However, for my perhaps comparatively slow ears, nothing has ever stuck. I never learned the narrative of Night Fantasies, even with the score in hand. Blue Bamboula was Jerome Kern in comparison.

The Wuorinen piece goes along with “Peter Lieberson on Record.”