Yesterday I went out to Corona, Queens and toured the Louis Armstrong House Museum.

Louis Armstrong—the world’s most famous jazz musician—was an international celebrity who could have lived anywhere. Yet in 1943, he and his wife, Lucille, settled in a modest house in Corona, Queens, where they lived for the remainder of their lives. No one has lived in the house since the Armstrongs, and the house and its furnishings remain very much as they were during Louis and Lucille’s lifetime. Today, the Louis Armstrong House Museum is open to the public, offering guided tours of Louis’s longtime home. On the tour, audio clips from Louis’s homemade recordings are played, and visitors hear Louis practicing his trumpet, enjoying a meal, or talking with his friends. Visitors also get to enjoy an exhibit on Louis’s life and legacy, and the Armstrongs’ beautiful Japanese-inspired garden.

On staff at the Archives is Ricky Riccardi, the man for Louis Armstrong. Read Riccardi’s outstanding blog for serious nuts and bolts about Pops: try this entry on the Hot Fives session that produced “Cornet Chop Suey” and “Muskrat Ramble.”

DTM is also usually a nuts and bolts kind of affair. But since Pops remains of interest to all Americans, I wanted to experience the House Museum more like a tourist than as an insider.

It’s hard to realize what the House Museum is until you get there. The above blurb is fine but when you pull up on what looks like Edith and Archie Bunker’s block the gravity of the situation begins to hit home.

The staff, especially director Michael Cogswell, was very lenient with me: If you visit don’t expect to be able to take photos or play the piano.

But my photos don’t do the atmosphere justice, either. The House Museum is right by LaGuardia airport, perfect for stopping by for an hour on a travel day. Highly recommended!

The garage is now the check-in and gift shop. Thousands of school kids see the House Museum every year. I watched the short introductory movie about Pops: it’s good! The gift shop has specialty Armstrong CDs and memorabilia you can’t get anywhere else. 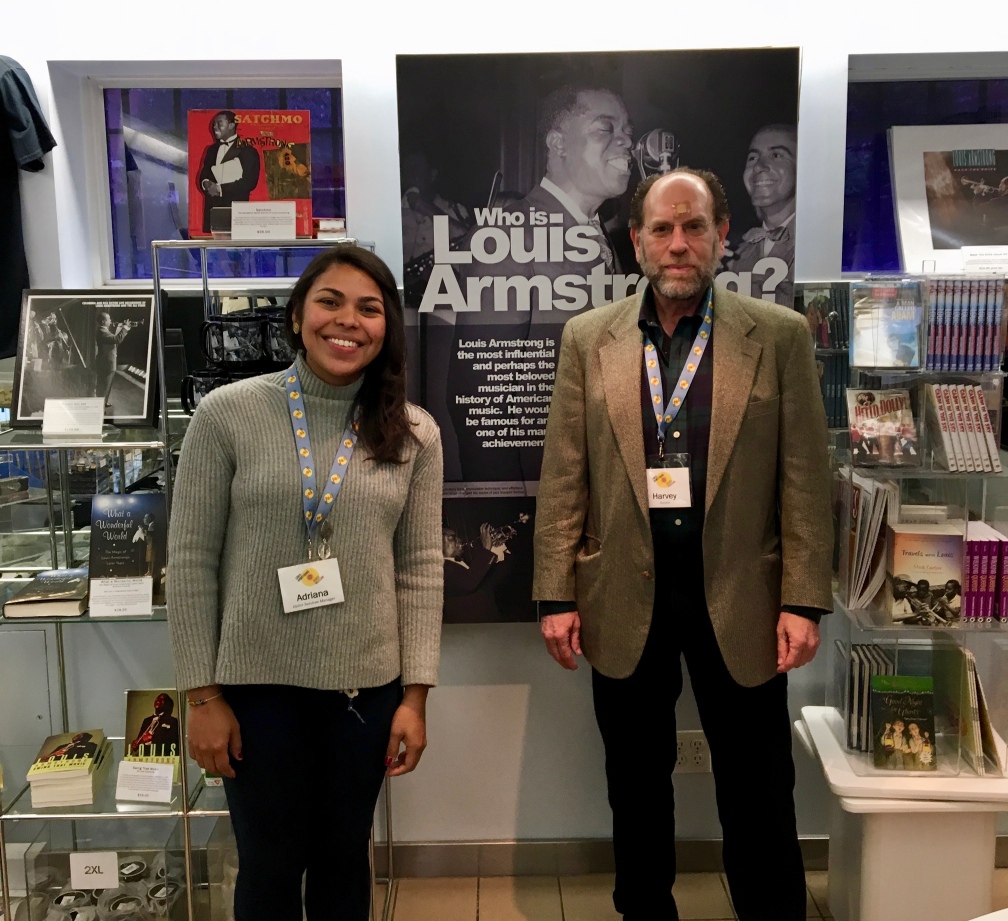 Adriana works the desk and Harvey gave me the tour.

Drummer Hyland Harris shows up on DTM once in while and also penned a terrific liner note to Tootie Heath’s Philadelphia Beat.  He was my “in” at the House Museum. Here we are on the steps to the front door.

Most of what is on display is for general consumption, but my eyes widened when I saw the actual chart Pops read from for a record date with Ella. 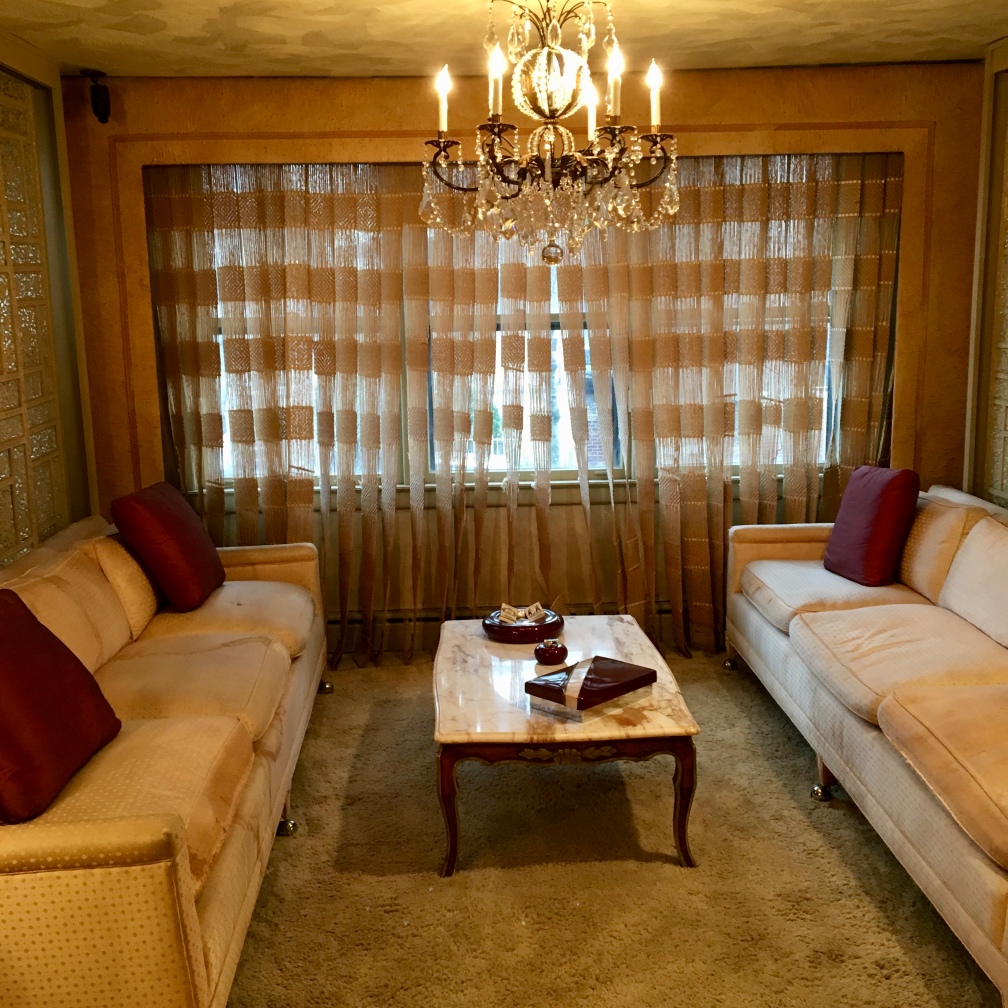 The living room is gracious.

Above the piano hangs Arturo Toscanini. 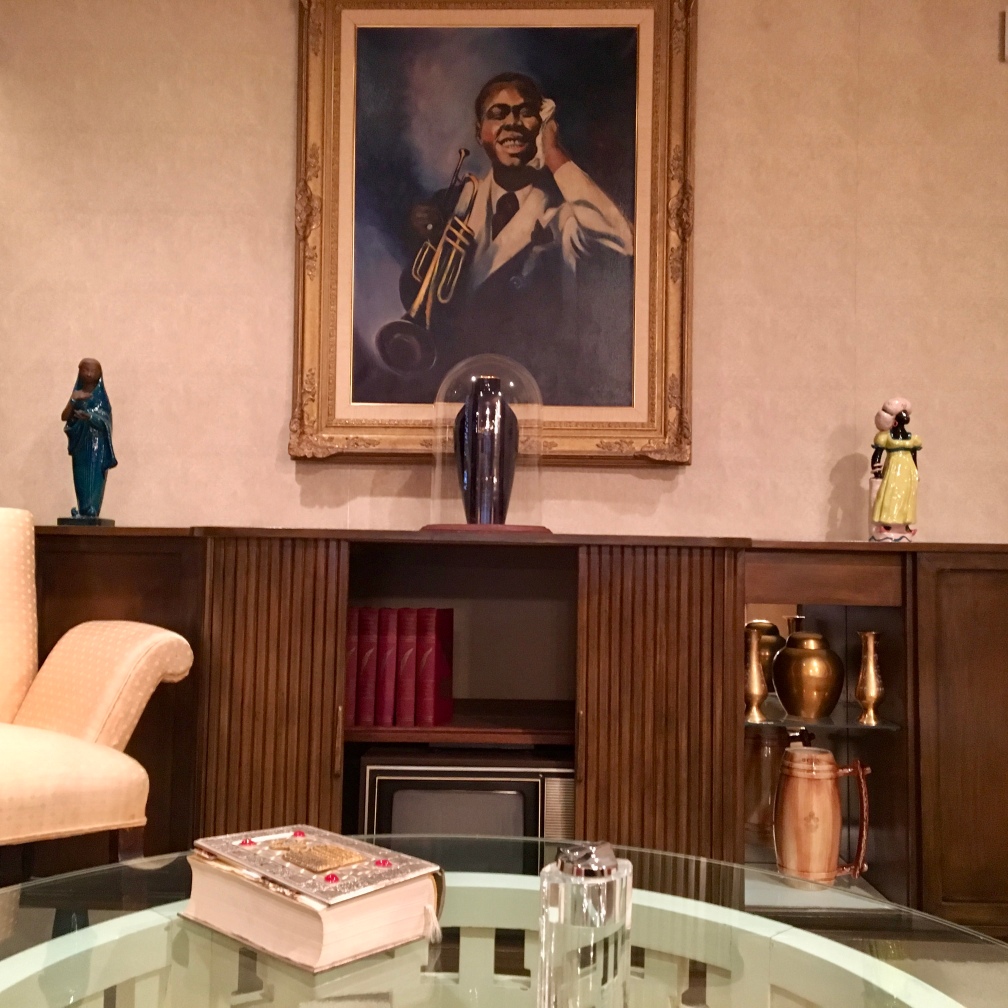 The center object is an exceptionally rare kind of Serves vase. They made three of this model: for Marie Curie, Toscanini, and Pops.

The Lladró brothers presented Pops with the first Lladró figurine to have African features. 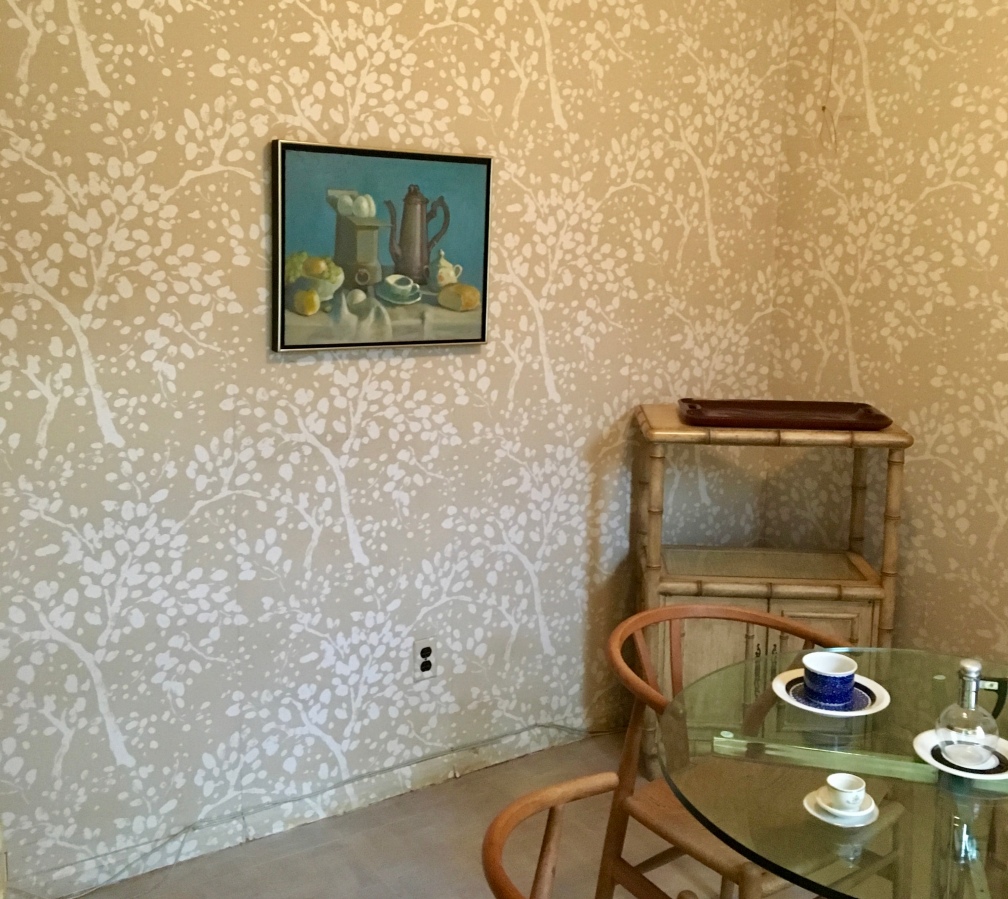 The breakfast nook has a still-life by Bob Haggart, jazz bassist and composer of “What’s New.” 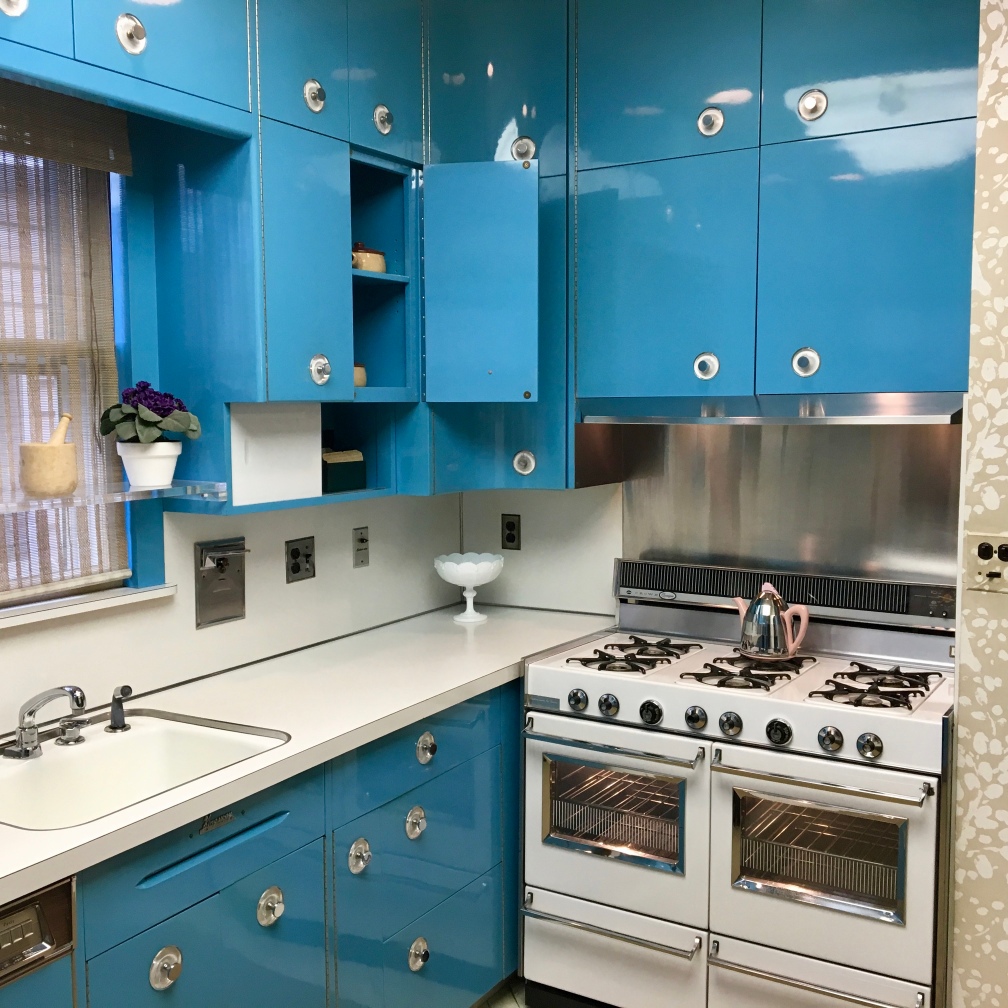 The kitchen is done up with a fabulous modernist aesthetic. 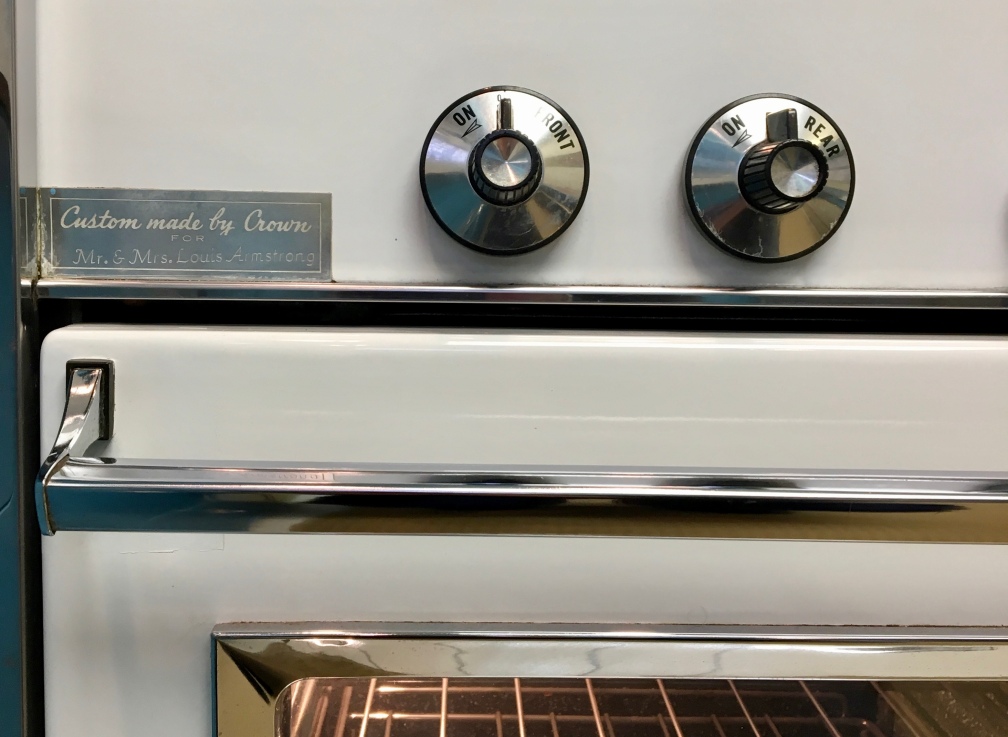 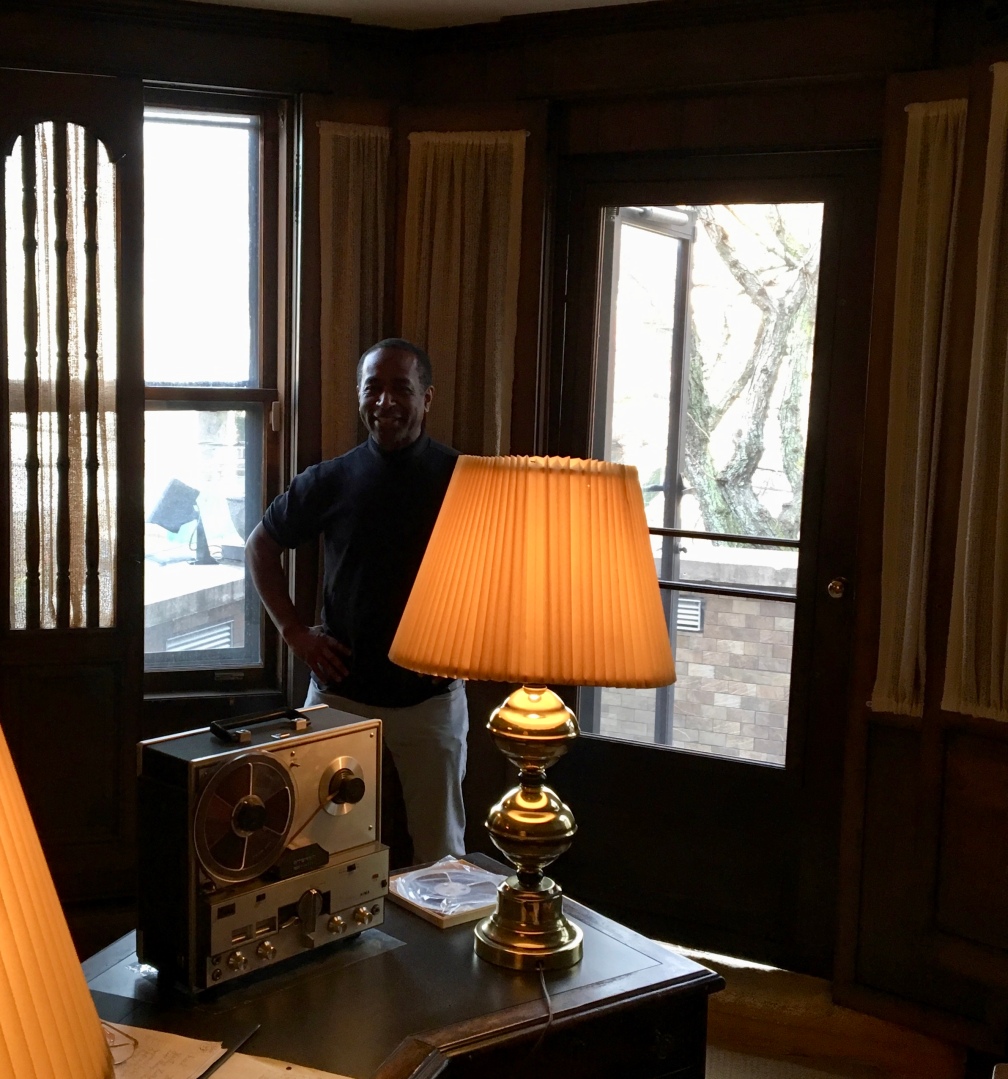 For musicians like Hyland and myself, that study is the highlight. Pop’s gear! 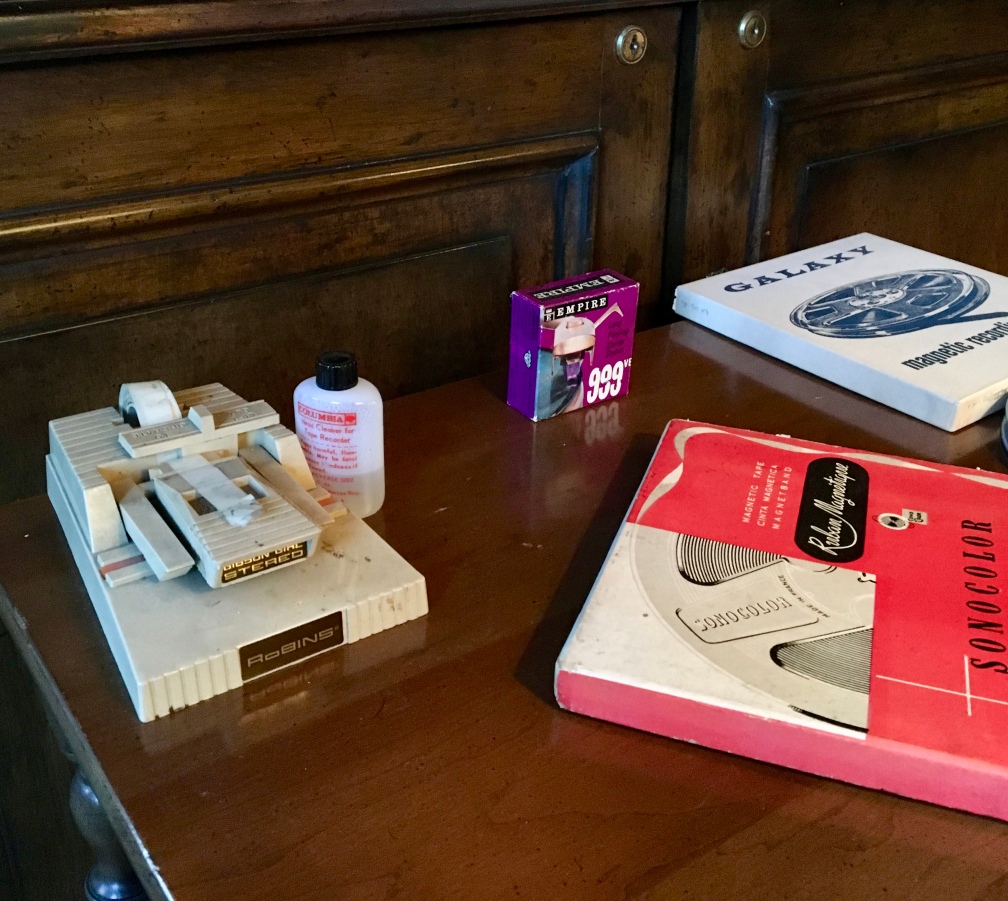 Pops edited the tapes himself.

When he finished assembling a tape, he’d write “‘S’ALL.””

The reel-to-reel machines are built right into the wall. Pops would tape anything and everything. Visitors to the House Museum are treated to clips in every room. The clips change, but Hyland and Harvey played me examples of Pops practicing with records, singing or playing along with pop tunes and Sousa. These tapes gave me chills. Unbelievable.

I walked into this one. There’s a pretty good painting of Pops in the study. I asked, “This painter, Benedetto, is he famous?” Harvey answered, “You know him better as Tony Bennett.” I told Harvey he owed me 50 bucks for setting him up so perfectly.

After the House Museum I relaxed in the garden of Lucille and Louis Armstrong. Not pictured, but past the fence and to the left, is the house Dizzy Gillespie lived in for many years. These two architects of American music would frequently play cards in the basement den of 34-56 107th Street.