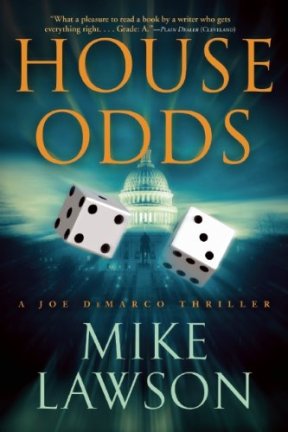 There’s a certain amount of debate among musicians, “What is the correct response to Trump/Bannon/Devos/Flynn/Sessions/etc?”

It’s a good debate, but at least instrumental music is fundamentally abstract. As this new era surges forth, I wonder how many of my beloved mystery and thriller novelists are putting pre-Trump manuscripts aside. K.C. Constantine said, “The crime writer is society’s stoolie,” but how can an author reduce this level of large-scale corruption and ethical rot to a workable frame for a novel?

While society adjusts, we can take a tiny bit of solace in the large backlog of excellent material ready to help us forget our woes. Recently I discovered the work of Mike Lawson, who has been at it since 2005. His debut novel, The Inside Ring, featured Joe DeMarco, a D.C.-based fixer and bagman for the Speaker of the House. There are now ten great DeMarco books, very much in the Ross Thomas vein, full of seemingly true-to-life political detail leavened by laugh-out-loud humor. The Speaker,  John Mahoney, is based partly on Tip O’Neill, and frequent sidekick Emma is an ex-spook of wily resource. In this era of relentlessly good superhero characters, it is such a pleasure to read about the exceedingly fallible DeMarco, a guy just trying to keep his low paying job and not get killed or arrested in the process.

Lawson’s prose is smooth and the pages can’t be turned quickly enough. Many of the books have an unusual structure where the main plot is resolved three quarters of the way in before going on another tangent. Perhaps that is to increase word count (the books are all longish thrillers in the current vogue), but I never minded as almost every scene was a pleasure to read. Two of my favorites in the series are House Odds, about corruption in high-end housing in Boston, and House Divided, featuring the rather unlimited powers of the NSA. All the details are believable, nothing turns out quite they way anybody wants, and it is so nice to get genuine laughs along the way. Bravo.

More recently there has been a new series under the name M.A. Lawson. (I first learned about Lawson when picking up the excellent Viking Bay in an airport.) The protagonist is Kit Hamilton, a more flawless and cowboy-derived character than DeMarco, perhaps a kind of female Jack Reacher. The Hamilton books are arguably a shade less distinctive than the DeMarco series but they are still a rollicking good time for lovers of the modern thriller. The latest is just published, K Street, which includes some fabulous scenes of cat-and-mouse worthy of Thomas Perry.

Fans of Perry, Lee Child, Olen Steinhauer, John Sanford, and the rest of the best “tough guy” escapist reading should definitely be enjoying Lawson as well.