Thanks to Vince Keenan, I met Eddie Muller at last. With Etsuko Tamazawa, we all spent time at the Dashiell Hammett apartment on Post Street in San Francisco.

It was a great hang. I went a little fanboy crazy when confronted with an actual copy of Duke’s Celebrated Criminal Cases of America. (Every Hammettophile knows this book lurks beneath the alarm clock on Sam Spade’s shelf.) 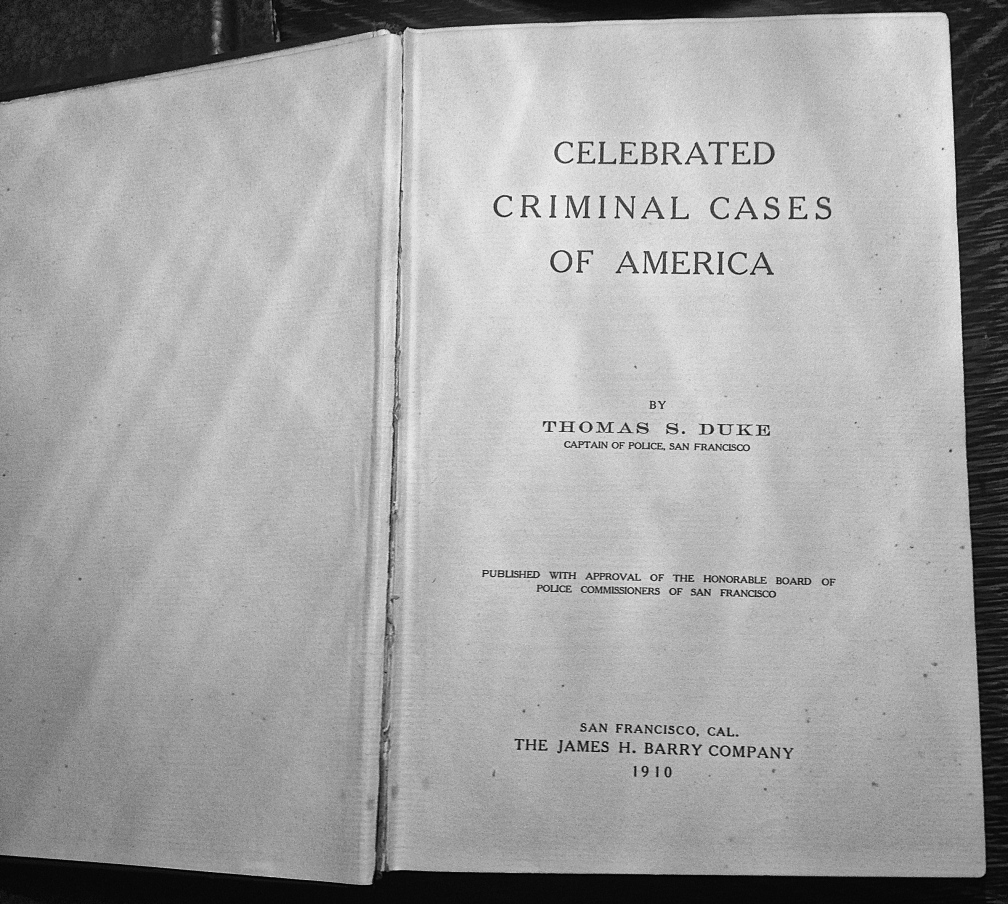 When in the apartment, I grilled Eddie about every Hammett adaptation and screenplay. It was a such a pleasure listening to an expert in his element. There’s a lot more there than I had realized; most of it I haven’t seen.

Regrettably I still haven’t made my way though Etsuko’s list of top film noir (found at the end of DTM’s “Crimes of the Century”), but that’s a project I certainly intend getting done sooner rather than later.

Earlier, in Seattle at the start of this tour, Vince and I wondered about the great recent crime films. Are there any? Well, yes. But it’s not a golden age. Honestly I think thrillers are better these days than simpler crime movies. We are too sentimental and fancy to easily accept cops and bad guys as everyday people now. We need things to be done on a grander scale.

Somehow I never saw Jackie Brown until last night, but Vince said I should check it out. (He also sent me a link to an interesting commentary by Gary Deane. Deane agrees with me that Out of Sight is not that great – probably we are the only two who share that opinion.)

In Jackie Brown, I was struck by how much more comfortable Robert Forster seemed than his more famous fellow actors. Samuel Jackson and Robert DeNiro are somehow not quite right in this self-consciously simple tale. They are too big or too small. But Forster is a working man. He gets it. For me, he carries the movie. (Both women, Pam Grier and Bridget Fonda, are good too.)

Jackie Brown and the current A Walk Among the Tombstones seem obviously influenced by my favorite set of movies, those classic gritty crime films of the late 60’s and early 70’s. Just for fun, here are ten commandments:

Bullitt (1968) Plot makes no sense yet the tension maintains. Steve McQueen is not just hard, he is vulnerable. Famous car chase.

The French Connection (1971) Another famous chase. Gene Hackman has only the most tenuous hold on morality.

Get Carter (1971) Astonishing Newcastle noir. Michael Caine is meaner and more charismatic than anybody.

Dirty Harry (1971) Don Siegel’s reactionary masterpiece of working class entertainment is a successful closed system. Far too influential, but I admit I’ll always enjoy it.  The terrible sequels should never have happened.

The Long Goodbye (1973) Meta and marvelous. Elliott Gould in a black suit on a bright California beach. Many scenes improvised in standard Robert Altman fashion. Probably my favorite film of all time.

The Friends of Eddie Coyle (1973) Robert Mitchum was a star, but he had no problem playing a minor criminal in superb underdone fashion. (Robert De Niro should have looked at this when preparing for Jackie Brown.) It seems like director Peter Yates learned from Bullitt, for Coyle solves a certain problem in the plot even more convincingly than in the book.

All you need to know about why it is hard to made a good crime movie now can be learned by comparing the recent Killing Me Softly with The Friends of Eddie Coyle (both adaptations of George V. Higgins).

The Taking of Pelham One Two Three (1974) Well, maybe this is a thriller, not a crime film. But what a movie! It’s one of the most purely enjoyable flicks I know. A must for any serious New Yorker.

Chinatown (1974) Very famous, with an original Robert Towne script worthy of the very best crime novels. In terms of going for something retro, Chinatown remains in a class of one.

Night Moves (1975) Maybe this isn’t quite as good as the rest of this list, but it is an appropriate end to the era. Gene Hackman can’t figure out a damn thing, and the conclusion is as downbeat as they get. They really don’t make them like this any more.