Everyone in Kalamazoo, Michigan speaks of Curtis Curtis-Smith with a hushed tone of respect. I first met him while in town with Alex Ross for the Gilmore Keyboard Festival.  Curtis-Smith then sent me the score and recording of his Twelve Etudes for Piano.  I was taken aback by their beauty and the composer’s own virtuoso pianism.

With Curtis’s permission, I’m offering a few amateur snaps and lo-fi excerpts to encourage further exploration of this major voice. His record of the Etudes is coupled with a hair-raising event called The Great American Symphony (GAS!), and the score is easy to find.

The cycle of twelve etudes begins with a rather jaunty canon.  It gets quite hard later on. I admire challenging composers who can play their own music! (Click to enlarge the pages.)

The second is a lyrical effusion over a ground bass. The composer’s marking, “….demands a non-legato cantablie/espressivo touch.  Surely, a singing, expressive line need not be limited to ‘traditional’ legato touch.  Bartok’s parlando indication comes close to what is needed here, although the non-legato touch of the be-bop pianist may be a better model,” is dead on.

Track three has an astonishing sonority:  huge hits in the left leave a negative image of delicate dyads on top. 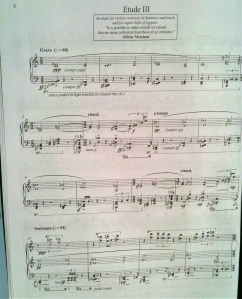 The rest of etudes are all great, but I particularly like number seven, which reminds me of Jaki Byard a little bit…

…And number ten, the longest of the set, which has the kind of wide-spaced “blues” feel that Morton Gould repeatedly attempted, Curtis is more sophisticated than Gould.

I’m afraid I committed a faux-pas at our initial meeting, asking Curtis if he was still bowing pianos.  Curtis winced:  he hasn’t been doing that for many years, as the above excerpts show!  He’s probably frustrated that reference books like David Burge’s Twentieth-Century Piano Music and Maurice Hinson’s Guide to the Pianist’s Repertoire only discuss him as the inventor of this extended piano technique.  From his liner notes to CRI 346, Five Sonorous Inventions for piano and violin:

The bows are constructed of nylon thread of varying thicknesses and lengths, and of varying number of strands: some of the bows having as few as eighteen strands, others as many as forty-eight, depending on the register for which they are intended. These bows are threaded at various points through the piano strings prior to the performance.

This sounds like it could just be a party trick.  However, it turns out to be a genuinely valid:  the piano now can increase volume on a sustained note.  It’s not out of style, either, as Barbara Lieurance is currently touring the early Curtis-Smith Rhapsodies.

Of the “bowed piano” Curtis-Smith works I’ve heard, I’m particularly struck by Unisonics from 1976 (CRI 388) featuring Trent Kynaston on alto saxophone.  Yes, that’s the same Trent Kynaston who is familar to jazz students everywhere as the author of excellent books of transcriptions.

I need to learn more about Kynaston’s jazz horn (Billy Hart has recorded with him).  But for now, I’ve always had a soft spot for avant-garde classical saxophone, and Kynaston is superlative as a youngster playing both lyrical and extreme vocabulary with Curtis-Smith.  The composer himself handles the tricky extended techniques with flair.

It is always a blessing when a major stylist of American music takes root outside the major cities.  Kalamazoo is lucky to have him.