(The third movement of Schoenberg’s Op. 19 begins with a II/V to A-flat and concludes with a bluesy IV/I in B-flat)

(Update: The first missive was about the blues and “All the Things You Are.” What follows is definitely “advanced studies,” not for beginning jazz students. Black music is de-emphasized in this article (not the case in the first missive). This lack of emphasis is not a value judgment about the importance of black music to jazz! If I had a true beginner on my hands I would start with the blues, no question.)

I teach piano at New England Conservatory. Several students asked what to work on during the summer. My usual response was, “Bach and Chopin.”

There can be a backwards way we learn about harmony these days. In some circles, “jazz harmony” is held to be a valid discipline. It’s not. “Harmony” is the correct discipline.

It’s far better to learn basic, pre-modern, rigorous “harmony” than a table of Bill Evans or Herbie Hancock voicings. That way you can figure out how you want to spice up pure harmony according to personal taste, not as automatically received wisdom from Evans, Hancock, etc.

With only a few exceptions, the interviewees in Len Lyon’s The Great Jazz Pianists (1983) all discuss studying harmony, theory, and repertoire.

Teddy Wilson:  “The traditional disciplines — rhythm, harmony, and melody — go way back in the history of music. All the great composers mastered them, and they achieved freedom within those disciplines. I had a very fine classical teacher, Richard McLanahan..I got an offer to perform Grieg’s Piano Concerto with the National Symphony in Washington D.C., if I had it under my fingers. But I didn’t feel equipped.”

John Lewis:  “I still play written music — Chopin, Bach, Beethoven — as much as I can.”

George Shearing:  [on playing Mozart, Poulenc, Bach, and Gershwin from Braille scores] “I had classical piano and theory as well, but only from age twelve to age sixteen. That’s why it’s so important for me to learn concerti from Braille—to keep up with my theory.”

Ahmad Jamal:  “I was playing Lizst études in competition when I was eleven years old.”

Horace Silver:  “I got a harmony book from a music store and studied basic positions.”

Oscar Peterson:  “What I went through as a student was probably what everyone else grooming himself for the classical field goes through—Czerny, Hanon, Dohnanyi.”

Red Garland:  “I never played piano until I was in the army…. When I left the army, I bought an exercise book by Theodore Presser, and that was a great help for me.”

Jimmy Rowles:  [Where do your dissonances come from?] “That’s Ravel. He’s my man, but I like a lot of those cats. Debussy, Scriabin, Prokofiev, Rachmaninoff, Erik Satie, Villa-Lobos.”

Marian McPartland:  “I did my studying at the Guild Hall Music School in London, and I worked very hard at scales, the Hanon book of scales, arpeggios, doubled thirds. I’d practice eight hours a day, doing Bach fugues and Beethoven sonatas.”

Billy Taylor:  “There was pressure from my mother to stay with my Bach and study traditional piano. I wasn’t too thrilled about it, but I continued, until I met a neighbor of mine, Henry Grant, who was director of the high school band and a great music teacher. Almost all of the great jazz musicians who came out of Washington prior of ’55 worked with him. He’s one of the few people Duke Ellington actually studied with, and they were good friends….He’d hear me playing something by Ellington, say, “Prelude to a Kiss,” and show me a piece by Debussy with the same kind of harmony…The classical practicing I did was because he made me want to learn these things — all the little Debussy and Chopin preludes. He’d show me my own voice leadings in a piece and blow my mind.”

Jaki Byard:  “In the army I got interested in Stravinsky’s music and in Chopin again. I studied Chopin’s Fantasie-Impromptu and analyzed it. I began to analyze everything by Chopin, Bach, Brahms, Beethoven, and all these cats to find out what was happening in these compositions.”

Ramsey Lewis:  [What did you study in college?] “Heavy classics. It was the usual: Bach, Chopin, and so on.”

Bill Evans:  “My heritage is classical, too. I’ve played a lot of Bach and up through the contemporary composers.”

McCoy Tyner:  “At Granoff, I just studied theory and harmony, which amounted to basic eighteenth-century composition. But when I was young, I did practice scales a lot and a few compositions….I did use Hanon, Czerny, and Macfarren, which are all fine.”

Toshiko Akiyoshi:  “You start like anyone else: Bach, Hanon, Czerny.”

Herbie Hancock:  “When I was eleven, I performed at a young people’s concert with the Chicago symphony. I played the first movement of a Mozart concerto. In fact, I studied classical piano all the way through college, until I was twenty.”  [How are you preparing for a duo piano tour with Chick Corea?]  “I just got out my Oscar Beringer scale book, the Chopin études, Hindemith’s Ludus Tonalis, Bach’s Well Tempered Clavier, some Debussy and Ravel, and Slominsky’s Thesaurus of Scales and Melodic Patterns. I’ve heard that McCoy Tyner and John Coltrane used to practice out of that.”

Even the man from Saturn is in the same bag:

Sun Ra:  “The composers I studied were Chopin, Rachmaninoff, Scriabin, Schoenberg, Shostakovich, the whole gamut. I think I studied everything at that school except farming.”

Notice how Bach and Chopin come up more than anybody else. We all could be working on some Bach and Chopin. As documented above, this is the jazz tradition.

Many of those quoted also worked on Czerny and Hanon. Those kinds of technical exercises are acceptable if you don’t hurt yourself. Playing Czerny and Hanon in a slow, pretty, and completely even fashion will give you better results than hammering away like a factory machine, and it is very important to be in line with the mechanism and not be too digital with the fingers.

Igor Stravinsky regularly practiced Czerny as well, especially before writing a piano concerto. I understand how McCoy Tyner or Igor Stravinsky might clear their palette with Czerny (who has perfect voice leading and attractive melodic patterning) before waging their compelling war on the foundations of harmony. Sergei Rachmaninoff also loved to work on Czerny, although in his case I think he just enjoyed playing as fast and brilliantly as possible.

Geniuses do what they want. I’m in no position to tell McCoy, Igor, or Sergei to, “Stop with the Czerny already!” Still, in my firm opinion there’s no need for the rest of us to spend time with Hanon or Czerny when we can actually be working on great repertoire.

(When I want to to clear my own palette I am more attracted to the mild yet comparatively polyphonic and idiosyncratic two-page etudes of Johann Baptist Cramer rather than Hanon or Czerny. Beethoven, Schumann, and Chopin all admired and taught Cramer to their students.)

However, this is important:

Teddy Wilson also says in the book: “If you can play Chopin, it doesn’t help you play jazz. It’s as different as day and night. There’s nothing in the feeling of nineteenth or even early twentieth-century European music that has the jazz feeling at all.”

Mary Lou Williams goes even further, implying that study of European music is detrimental to the feeling of jazz. I don’t agree with this — look at what all these other masters have to say about it — but it is a good perspective to keep in mind.

At the least, please remember not to quote Bach or Chopin when playing the blues. The point of working on repertoire is to give yourself a base on which to build American music. Bach and Chopin are in the background, not the text itself. Billy Taylor’s story about working with Henry Grant seems ideal.

There’s lots of easy music by Bach and Chopin to sight-read through, not to mention all sorts of wonderful Schubert, Schumann, Mozart, Beethoven, etc. collected in intermediate or moderately difficult anthologies.

I learned a tremendous amount from two specific sources: the many easy preludes and études of Scriabin, and the easier things of Schoenberg. (Op. 19 is at the top of the page.)

Studying at least a little bit of theory in the abstract can also be helpful. Horace Silver, Red Garland, and McCoy Tyner all mention it. A couple of theory courses in college were pretty easy for me, because in high school I spent a lot of time with Paul Cooper’s book Perspectives in Music Theory: An Historical-Analytical Approach.

However, like most musicians who are not professional theorists, to this day I understand theory mostly on an instinctive and empirical level. “If it sounds right, it must be right.”

(Don’t take my word for it! Look at what the masters say about it above.)

Herbie Hancock mentions Hindemith. Fair enough, although I find most Hindemith pretty square, with the Ludus Tonalis being especially deadly…

…but, hey, nothing Herbie is going to play onstage in his own music will ever be square. The point is to rummage through stuff that you can use, stuff that can rattle around in your subconscious.

Some of my own harmony onstage must be informed by all my years of poking around inside the many anthologies of 20th century piano music. A particular favorite is New Music for the Piano, a jumbo volume of minor masterpieces that has repeatedly resurfaced in my studies ever since I found a copy in the early 1990s. (See, for example, Hall Overton, Composer.)

When producing a concert of Vivian Fine, Miriam Gideon, and Louise Talma for my teacher Sophia Rosoff, I learned the Fine and Gideon pieces from New Music for the Piano.

There’s a vast number of valuable composers whose work recedes into history without much upkeep. But in my view, the fact that Gideon and Fine aren’t so familiar is all the more reason to imbibe and pilfer: At the least, they are certainly more of a secret weapon than Hindemith.

I only had a moment to record with my iPhone at the Vortex jazz club in London the other day, so I left off the last and hardest movements of both pieces. Truthfully what follows is plenty hard enough to do quickly and accurately! My recordings aren’t perfect, but my point is also: I don’t need to play them perfectly for them to enter my subconscious and fertilize my imagination. 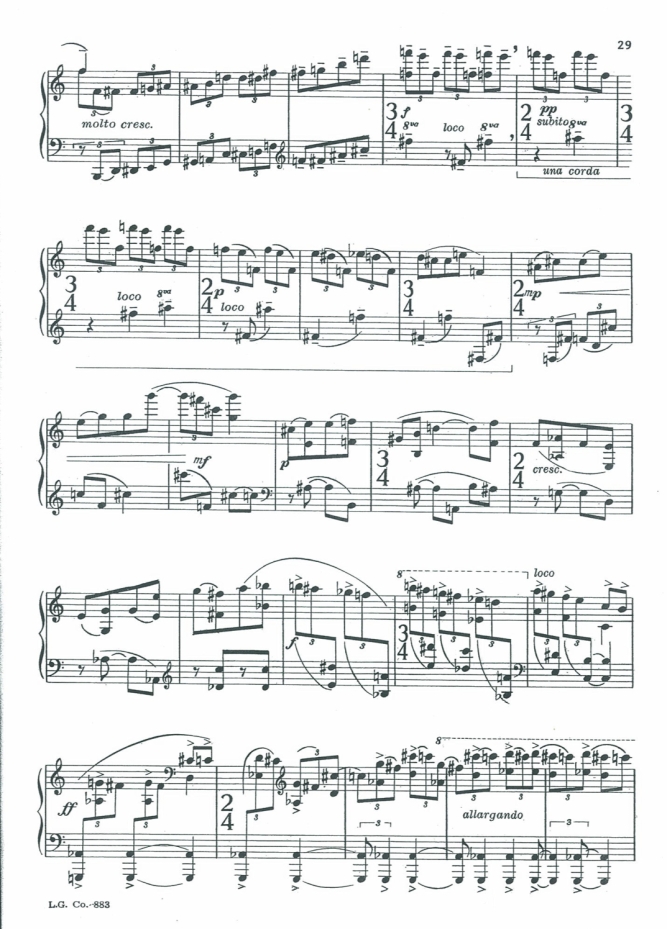 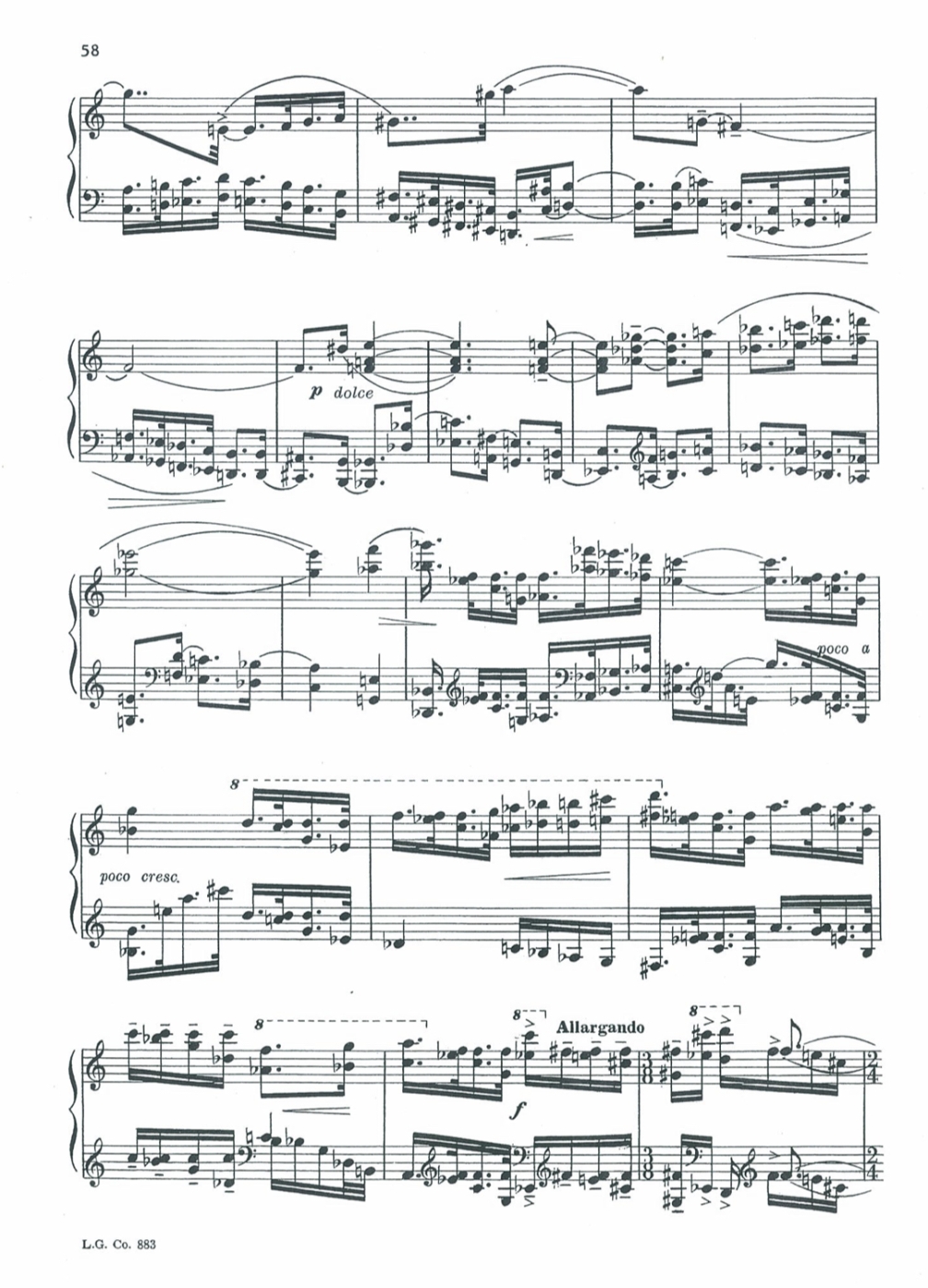 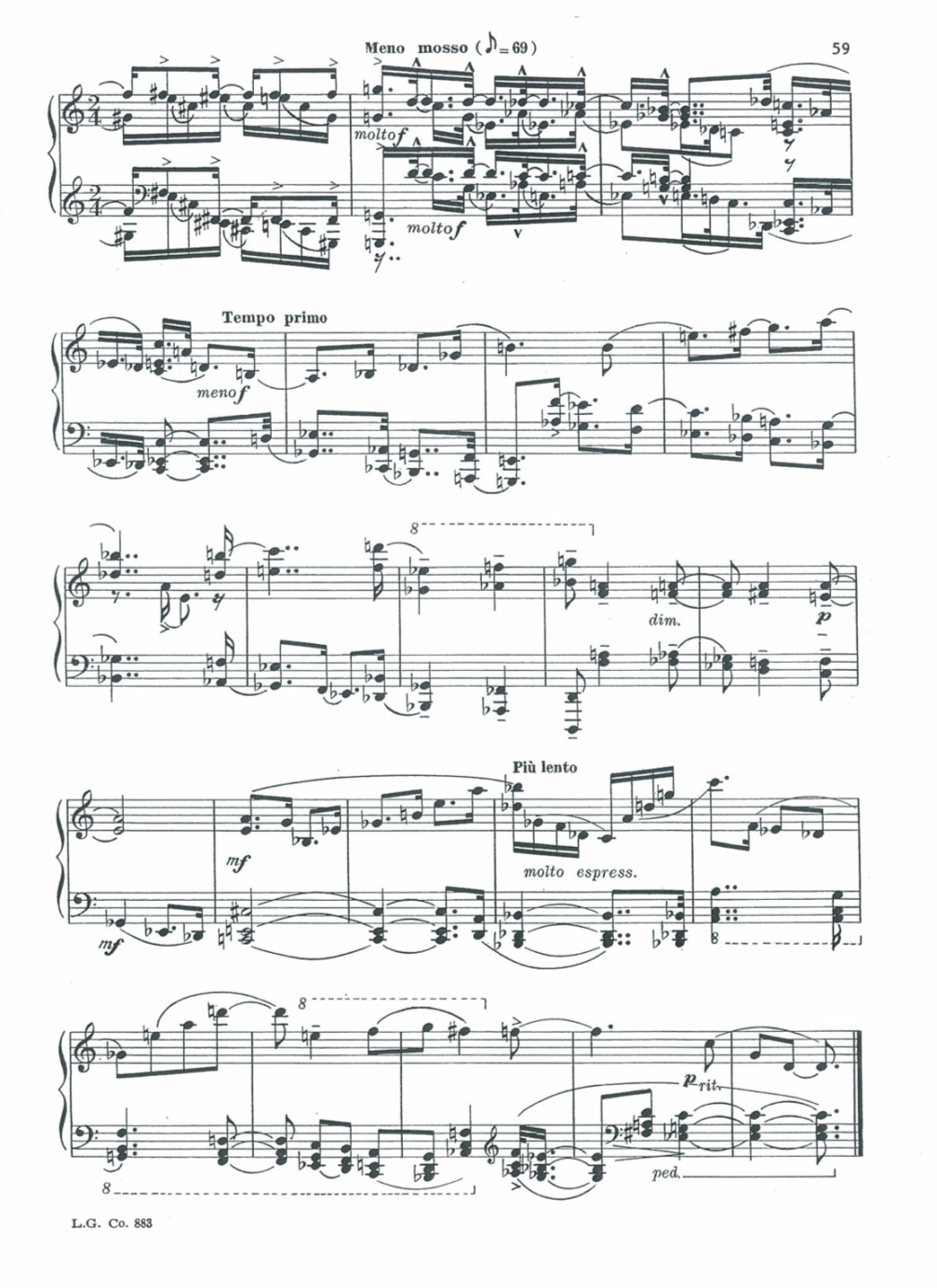 This is masterful midcentury American composition. The Gideon (written in the 1940s) is a lean and mean version of the “restless” Scriabin tradition (there’s even some octatonic effects) and the Fine (from 1952) is straight up Boulanger/Stravinsky idiom. Both works are interesting, distinctive, and well-made for the instrument.

Driving on tour last month we listened to the Leon Kirchner Piano Sonata (1948) played by Sara Laimon. Reid Anderson commented, “This is like contemporary jazz.” He’s right, except that Kirchner controls his pitches a lot better then most contemporary jazz.

In their lessons this past year, many of my students began a standard with a a “free” intro, usually a mildly abstract two-part invention, just like the slow movement of the Gideon suite.

But remember, Teddy Wilson noted that European-style music doesn’t overtly relate to jazz feeling.  Admittedly, Teddy was from a different era, but still: Make sure your “modernist improvisation” doesn’t sound like a knockoff of something Miriam Gideon did better 70 years ago. Learn all the interesting music you can, but don’t skimp on swing and the blues. Those American elements are how you become Herbie Hancock — and not some person who can’t sit in and hang with the serious cats.