[I was fascinated by Asher Tobin Chodos’s 2018 article The Blues Scale: Historical and Epistemological Considerations, and asked him to present a streamlined excerpt on DTM. The full article can be read in Jazz Perspectives. — ei.]

If you’ve studied music formally, you probably know the blues scale given in the 1970 update to Jamey Aebersold’s 1967 method book, How to Play Jazz and Improvise:

And, if you’ve spent any time listening to the blues or trying to play it, you probably know just how miserably this scale fails as an approximation of that idiom. You might also be offended by the way it projects a certain racial condescension, forcing the music of the African diaspora to conform with the European system of music theory.

There’s nothing unusual about this: in Aebersold’s “Scale Syllabus,” you can see that the blues scale appears next to other ethnically reductive scales like “Spanish,” “Jewish,” and “Hindu.”

The blues scale reduces a virtuoso tradition to a trivial musical doodle. This leads many jazz musicians to deny that the blues scale exists, even though someone as talented and important as Benny Green plays an unvarnished example on the piano break of “Don’t be ‘Shamed” (on Testifyin’! (1992)):

The Aebersold scale is so ubiquitous today that most people don’t know the scale has a history, or that more than one blues scale is possible. Yet before jazz music joined the college curriculum (before, that is, around 1967, when Aebersold first published How to Play Jazz and Improvise), there were actually a lot of different blues scales in circulation. Here is a brief survey: refer to my full article for more detail.

“We shall call it the blues scale,” proclaims Winthrop Sargeant in 1938. Sargeant was a classical violinist who joined the San Francisco Symphony at age 18. He lived an emotionally tumultuous life (read his 1970 memoir, In Spite of Myself, for a fascinating account of a lifetime of psychoanalysis) and abandoned his performance career to become a critic. In a long chapter on “the Scalar Structure of Jazz,” he distills this scale from a corpus of early jazz recordings. The analysis is often thoughtful and his affection for jazz feels sincere, but the text is marred by heavy handed racial essentialism.

1939: Leonard Bernstein, “The Absorption of Race Elements into American Music”

Leonard Bernstein’s undergraduate honors thesis at Harvard was a meditation on the true sound of “American” music, conceived strictly as part of the Western Classical tradition. The late 19th century had seen a fad for the development of “national” sounds, yet Bernstein thought that American music still hadn’t found its voice. For the young Bernstein, the solution was to appropriate black music (“race,” apparently, had already hardened into a euphemism for “black” by 1939). The idea is not to understand how “race” music works, much less to learn how to play it. Instead, the idea is to “absorb” it into the Western Classical tradition and produce a musical vocabulary that will resonate as “American.” For this, composers will need a scale, which the 21-year-old furnishes as the “Negro Scale.” As far as I know, this scale is Bernstein’s own invention.

This anomalous scale was not actually devised by the author but by his assistant, the composer Lou Harrison. Scholars report that Harrison didn’t have any particular interest in jazz or blues, so maybe it’s not surprising that he gives us such an odd collection of pitches. The B-double flat is absurd, but it may be Harrison’s attempt to indicate stasis within the pitch collection: an avoidance of functional harmony.

and then, the “African American Blues Scale”:

These scales are just a small part of Russell’s “Concept of Tonal Organization.” It’s not just a book about how certain scales embody certain chords, but a system intended to liberate musicians from the oppressive “do’s and don’ts” of traditional European harmony. The text as a whole elaborates a complex emancipatory philosophy of music that has been largely forgotten by the many chord-scale methods that inherit from the original. At any rate, his wacky pair of blues scales differ radically from any of their cousins.

1970: Jamey Aebersold, How to Play Jazz and Improvise (originally published 1967)

It is around the time that jazz begins its transit into the institution that Aebersold publishes his influential method book. The 1970 edition includes the blues scale that, today, is the only one anyone ever learns. It is important to note that Jamey Aebersold himself did not invent this scale (confirmed in personal correspondence with Jamey), but was simply setting down what must have been circulating in the growing community of professional jazz educators.

If this scale looks like Sargeant’s from 1938, it’s not a coincidence. Schuller seems to regard most of the other blues scales proposed over the century as misguided, and seeks only to refine Sargeant’s here and there. There are certain differences among them (they chop it into different “tetrachords,” and disagree about the “blue fifth”), but they are unquestionably having a 30-year conversation about this contested scale.

So far we have seen a lot of variation in the blues scale, which is interesting enough as a matter of historical fact. Today’s consensus around the Aebersold scale is so strong that it’s hard to imagine there being others, or a time before there was one. But the scale’s history represents not just different pitch collections, but different types of knowledge. Winthrop Sargeant is a music critic writing for the sector of American intelligentsia that has some interest in black music; his audience is different from, say, Jamey Aebersold’s. Accordingly, the blues scale represents for him a totally different kind of knowledge. One is a sort of “scientific” investigation — although a limited one, for Winthrop Sargeant could not play the music he was describing — the other a pedagogical tool. Bernstein’s audience, on the other hand, is the Western composer steeped in the late Romantic idea of musical nationalism; compared with, say, Russell’s “African American Blues Scale,” Bernstein’s “Negro Scale” differs not just in its notes, but in what type of musical knowledge it represents.

In this epistemologically activated frame of mind, there is one more author whose scale we should examine:

In this landmark study of the blues in American culture, the ethnomusicologist Jeff Titon treats the blues tradition as a literary and historical topic, as well as a music-theoretical one. Without going into the details of what this all means, it’s clear that his scale is the most technically exhaustive. But, in my opinion, that’s not actually what’s interesting about it. Instead, what matters is that he makes the distinction between a blues “scale” (pictured above) and a blues “mode”: 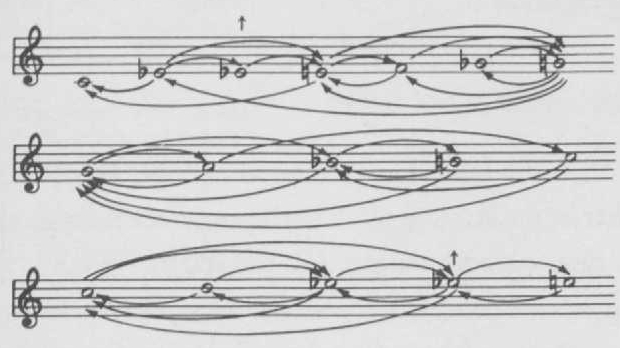 A blues scale is a collection of pitches. A blues mode is a summary of how those pitches tend to be used. Although this distinction is a basic one in ethnomusicology, Titon is the first writer about the blues to bother making it.

Titon’s detail-oriented work does not have the same casual racism that exists in many of the other authors examined here. It also serves as a useful reminder that, ultimately, scales are just musical ideas. People often ask whether the blues scale is “real,” but that question is pretty meaningless.