After his youthful ebullience was over, Lester Young’s tone darkened and he didn’t play as fast.  His beat remained basically the same but his lines at tempo are more careful.

But in at least one respect, his music got better after 1941, when he helped several popular standards reach their instrumental zenith. “These Foolish Things,” “I Can’t Get Started,” “Ghost of a Chance,” “She’s Funny That Way” and “Polkadots and Moonbeams” are among the romantic ballads Young transformed into vessels of hurt, languid eroticism. 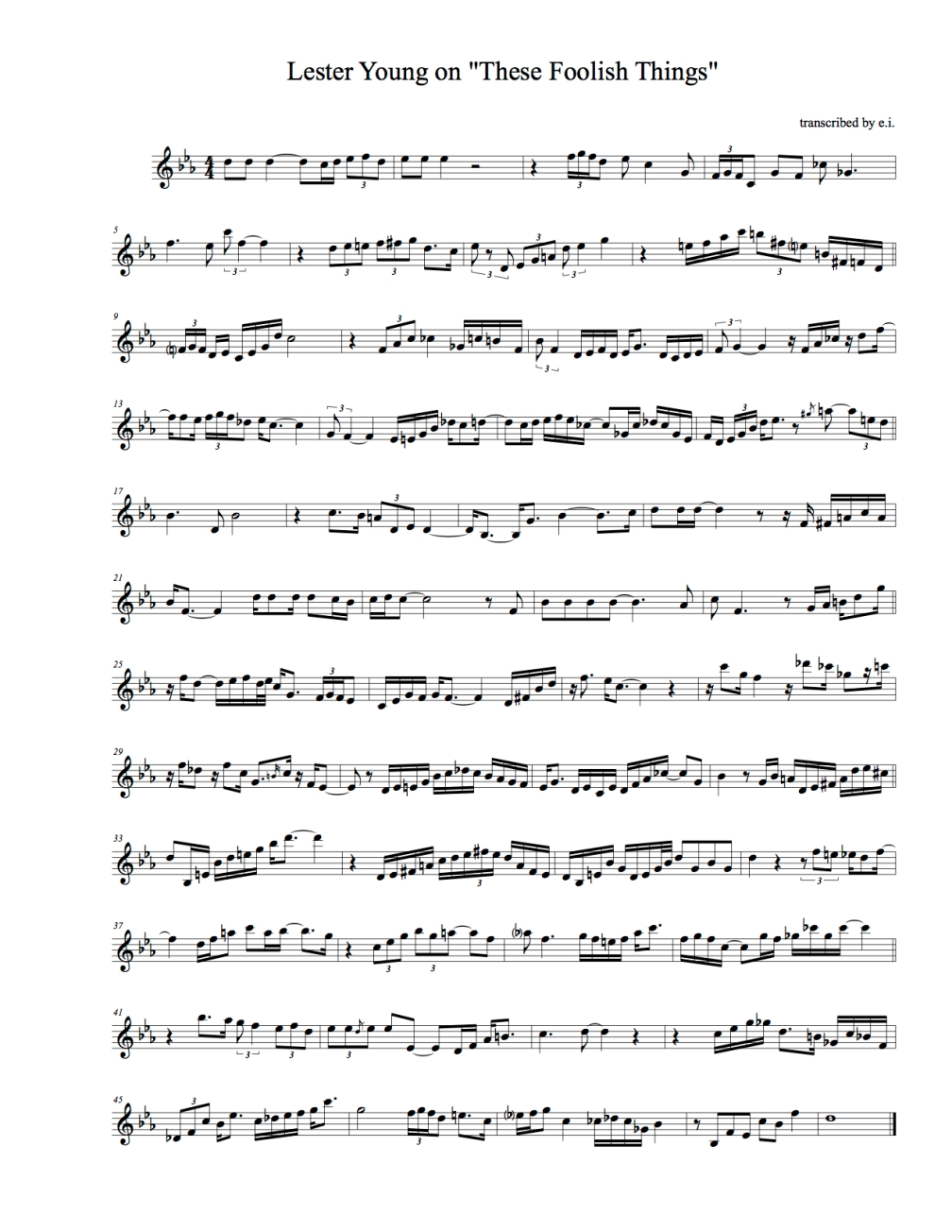 While Young probably learned this aesthetic from Billie Holiday, their early records together don’t showcase this hurt romantic emotion to the extent that his Forties solo ballads do.

If he had died in 1941, would Young have had the same status as lonely poet? Probably not. He would be more like Jimmy Blanton, Scott LaFaro, or Booker Little in our collective mind: a genius gone too soon.

As far as I can tell, Young didn’t yet wear a porkpie hat until after the Basie years. That porkpie—accompanied by the obligatory cigarette—would become the quintessential visual image of Lester Young. You can see that romantic conception during the opening shot of the popular 1944 short “Jammin’ the Blues,” an early example of Hollywood treating African Americans solely as artists, not as servants or as mugging entertainers.

First there’s the hat and the smoke, then the tenor saxophone is lifted, and the lonely musician attempts to make sense of it all from within the haze of smoke and uncertainty.

The iconic image of Lester Young as hurt poet is understood well enough in our society that there’s a fairly mainstream movie, Round Midnight, partly based on that mystique. Joni Mitchell’s words to Charles Mingus’s “Goodbye Porkpie Hat” (including vocalese to John Handy’s tenor solo) also refer to that kind of poetic feeling.

Let’s go back to those solos of Charlie Parker and Lester Young on that medium-tempo JATP “Oh, Lady be Good.” 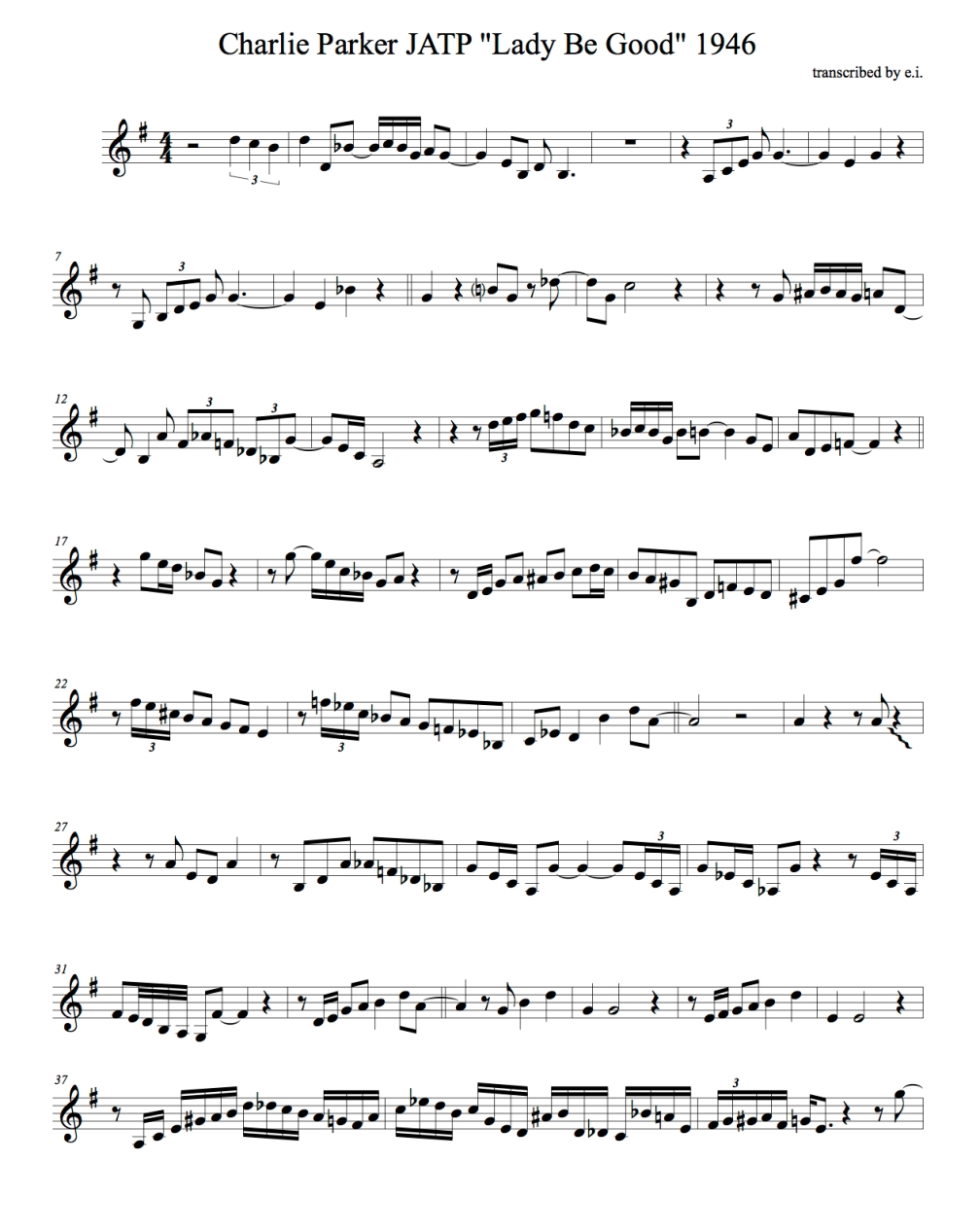 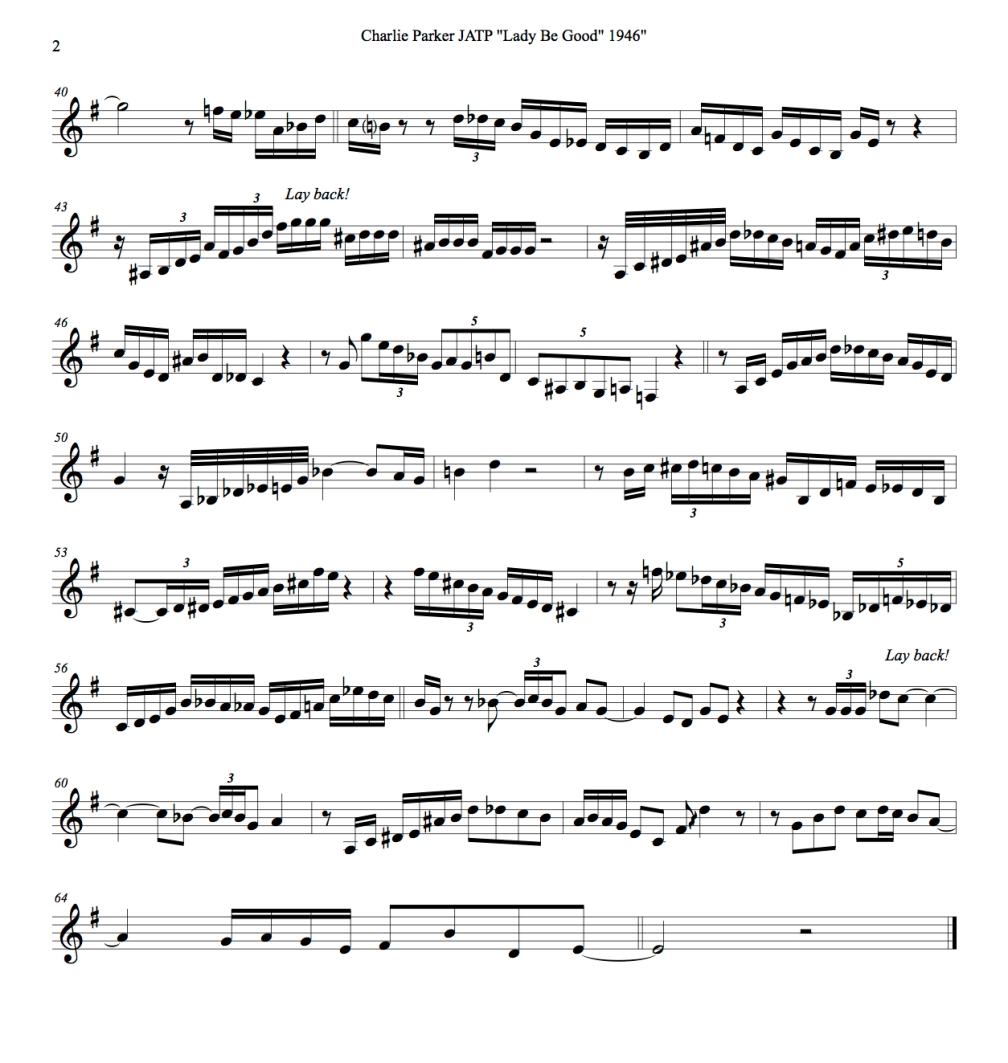 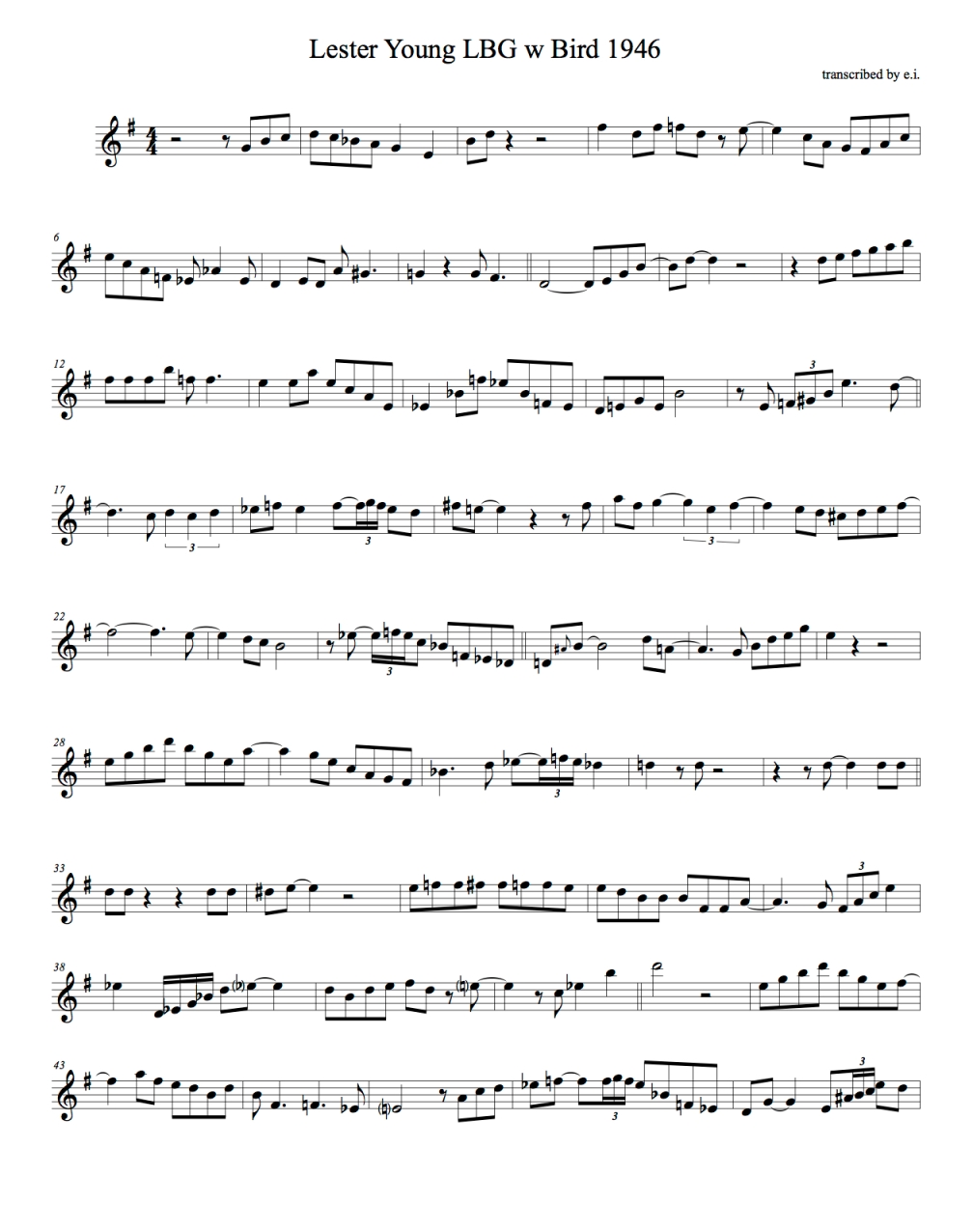 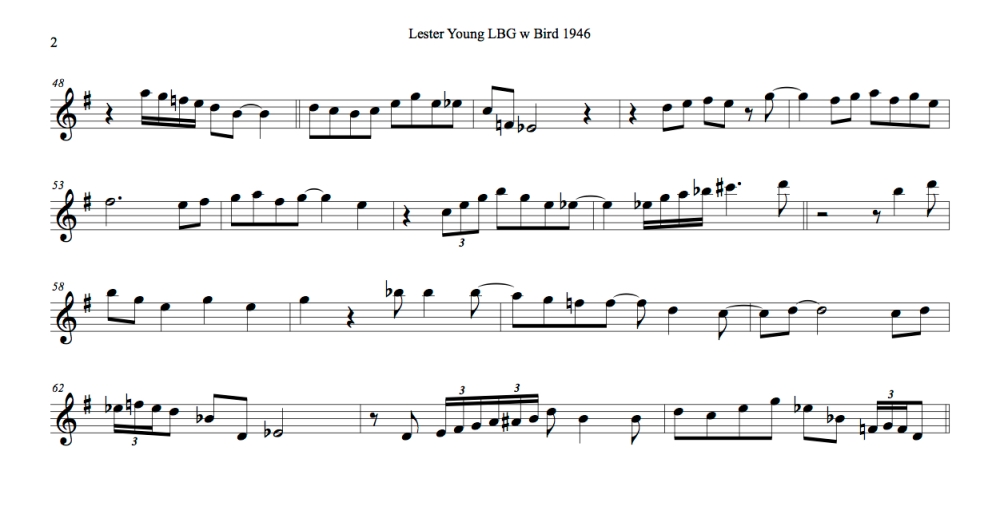 Bird is invincible and rather solitary. Young is strong, but not alone: he asks for help.

Not every jazz soloist dares to have this vulnerability. No matter where, what, or with whom, Charlie Parker could strap on the alto saxophone and burn. This isn’t to say that Bird didn’t care about the band…but Bird didn’t need a good band to sound good himself.

When Lester Young follows Parker, he displays none of that certainty. He doesn’t sound weak, but he does sound vulnerable. He sounds like he’s asking the band, “Are we in this together?” or, “How do you feel tonight?”

Almost every track of Young’s great pre-1941 work has Walter Page and Jo Jones. It remains some of the best feeling music ever made.  It sounds like the musicians have emotional concern for each other.

Even after that era was finished, I hear Young extend that kind of concern to his band on every record. “Are you cool?”

Bird and Pres together in 1946: Bird has the solo that was chosen for inclusion in the Smithsonian Collection of Classic Jazz. But who gets the better performance out of the band?

Most of Young’s post-1941 work in the studio was as a leader. Comparison with his great competitor Coleman Hawkins is interesting: the backing on Hawkins’s famous ballads “Body and Soul” and “How Deep Is the Ocean” is merely serviceable. But Young signature ballads like “These Foolish Things” with Dodo Marmarosa or “Ghost of a Chance” with Basie and Freddie Green feature dreamy accompaniment.

Young’s sympathetic spirit spurred some of his sideman to their best recorded performances. In addition to all the Basieites and Billie Holiday, consider the lesser known but significant Johnny Guarnieri, Joe Bushkin, Shadow Wilson, and Sid Catlett. I hardly know every record of these musicians, but I’d be very surprised if their sessions with Young didn’t feature some of their finest playing. Even frankly B-level musicians can sound good playing with Young.

Unquestionably the premier bandleader of the Fifties paid attention to Young’s generous attitude.

[Go on to Miles Davis and Lester Young]