I spoke with Jed Eisenman this morning and confirmed the passing of Michael “Mickey” Fletcher, the legendary bartender of the Village Vanguard. Mickey actually split about a month ago, but a WBGO “The Checkout” tweet from yesterday was the first time many of us had heard.

If you didn’t know him, Mickey was a bit scary: large, intense, deaf, and disdainful of complicated cocktails. But if you made it to the late night hang he was actually a gentle teddy bear, and always gave plenty of free drinks to the musicians.

He loved to tell the story of Thelonious Monk playing the Vanguard to a mostly empty house. While Paul Jeffery was soloing, Monk danced by, locked eyes with Mickey (then a young waiter), and said, “Look at all the invisible motherfuckers here tonight.”

Mickey said it took him about twenty years to realize that Monk may have not just been talking about the empty tables, but perhaps also about all the ghosts of musicians who had been in that club at some point.

As far as I know, Mickey wasn’t a musician, but he did have an instrument, the Vanguard cash register. While no one could work it without making at least a little bit of noise, Mickey was undeniably the most skilled at generating a catastrophic amount of sound from the metal box, especially during a ballad or a bass solo.

I was there the night before the new digital cash register came in May 2010, and at 2 AM took a photo of the champion in final repose: 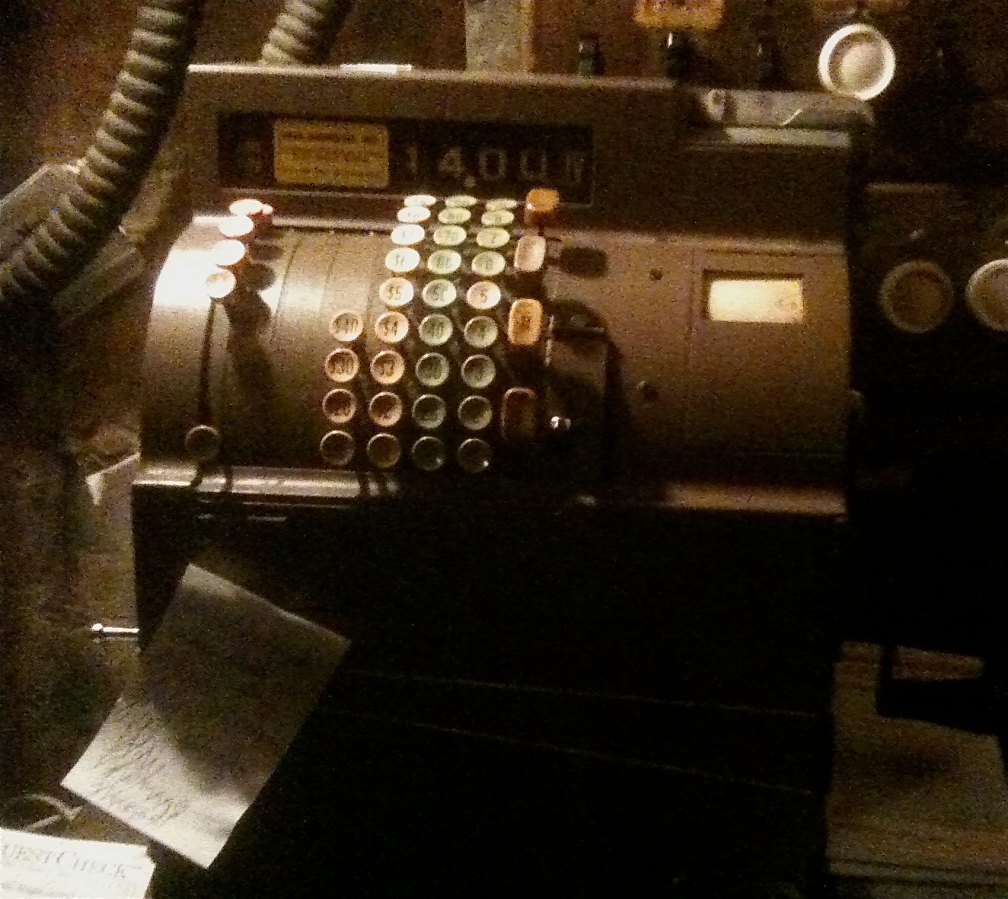 Thanks, Mickey, for the good times, the drinks, and the living history lesson. We all hope the register you are riffing with now upstairs is an adequately maintained and full-throated instrument.

Photo of Mickey by Ravi Coltrane with John Rogers’s phone. John is in the shot as well. (johnrogersnyc.com)

The Blues as Such are Synonymous with Low Spirits. Blues Music is Not.

We were at dinner with Stanley Crouch tonight, and I brought up Albert Murray. Stanley did the math and concluded that Murray was 97. After getting home, we all learned that Murray had actually just passed away a few hours ago.

Albert Murray’s great observation was that all Americans are both black and white; that nobody here is racially pure no matter what neighborhood they are from. In 1970, when he brought out this thesis in The Omni-Americans, it shocked Black Nationalists. In some circles he was never forgiven.

Murray changed tactics slightly in Stomping the Blues from 1976, where he highlighted the primacy of the black experience in blues and jazz music. This shocked certain white jazz critics and fans, and once again, in some circles he was never forgiven.

While his theoretical essays on writing like The Hero and the Blues are always intriguing, Murray’s fictional novels I always found tough going. Even though Murray’s command of bluesy English is impeccable there isn’t usually enough dramatic tension for my taste. Murray loved the idea of “hero” and his leads always seemed to be almost too heroic, or at least lacking enough obstacles.

There’s an amusing moment in Good Morning Blues when Basie says of Murray (his collaborator):

There is also that little four-bar riff that my co-writer likes to run down. He says that as a child you are forever putting yourself in the place of the heroes in whatever storybooks you know about. So he says, “When you set out from home to seek your fortune in the world at large, you really are trying to accomplish something that will turn the bright-eyed little honeybunch or sly-eyed little rascal into a prince or king or duke, or even a Count.”

Murray was much more than the Omni-theorem, the blues, and the hero, but those were his main three riffs. I’ve always forgiven any small imperfections because of his exceptional rarity. He is especially important for anyone who writes about jazz or any other kind of black music: if you’re in that mix, you gotta deal with Albert Murray.

Duke Ellington on the dust jacket of Train Whistle Guitar (as quoted in Stanley Crouch’s “Chitlins at the Waldorf”):

Albert Murray is a man whose learning did not interfere with understanding. An authority on soul from the days of old, he is right on right back to back and commands respect. He doesn’t have to look it up. He already knows. If you want to know, look him up. He is the unsquarest person I know.

RIP Butch Warren, the man who took Paul Chambers, Wilbur Ware, and “Washington D.C. slick” and made his own canonical version of the low undulating line.

Warren was on many miraculous sessions from the heyday of Blue Note. In less than three years, 16 records were recorded and immediately issued.

Herbie Hancock/Warren/Billy Higgins lead off the list: put any two of those three together and the rhythm section would be hip but not too fancy: raw but also urbane.

There were dates with others, of course, the most notable being the many live performances with Thelonious Monk. Warren was arguably the best bassist for Monk after Wilbur Ware, especially when he was partnered with Frankie Dunlop. Together they generated a kind of ultra-musical, almost Lunceford-era “clunk” that was a perfect match for the leader’s solemn surreality.

Any of the Monk/Rouse/Warren/Dunlop records are by definition incredible: however the recently issued Monk in Toyko 2-CD set has especially excellent fidelity.

Precious video also exists, including a version of “Evidence” on YouTube. During the bass solo the camera offers a close-up on Warren’s long, limber fingers.

In 1964. his last year before leaving the scene, Warren “took Garrison’s place” for three tracks with McCoy Tyner and Elvin Jones on Tyner’s Today and Tomorrow. Of course, many other great bassists played with McCoy and Elvin: Steve Davis, Reggie Workman, Richard Davis, Art Davis, Ron Carter, Bob Cranshaw. But I’m not all sure that Warren wasn’t the most perfect of the “subs.” At any rate, Warren easily manages to stamp those three tunes with his bright/dark personality.

Everything That You Would Adore

NY Times obit of Frank Wess by Willam Yardley, with an emphasis on flute.

On Twitter, Mark Stryker and Matt Wilson figured out that Wess had played with the big bands of Billy Eckstine in the 40’s, Count Basie in the 50’s, Jazz Composer’s Orchestra in the 60’s (this is, to be fair, an anomaly), and Jaco Pastorius and Toshiko Akiyoshi in the 80’s.

I heard Wess several times in New York in recent years. The blues and the ballads were always perfection.

When I was looking for something to transcribe, Red Sullivan suggested something from 1960’s Frank Wess Quartet with Tommy Flanagan, Eddie Jones, and Bobby Donaldson. Good idea! I was particularly taken by “Stella by Starlight.”

I love that the last note is the lowest note on the tenor saxophone. 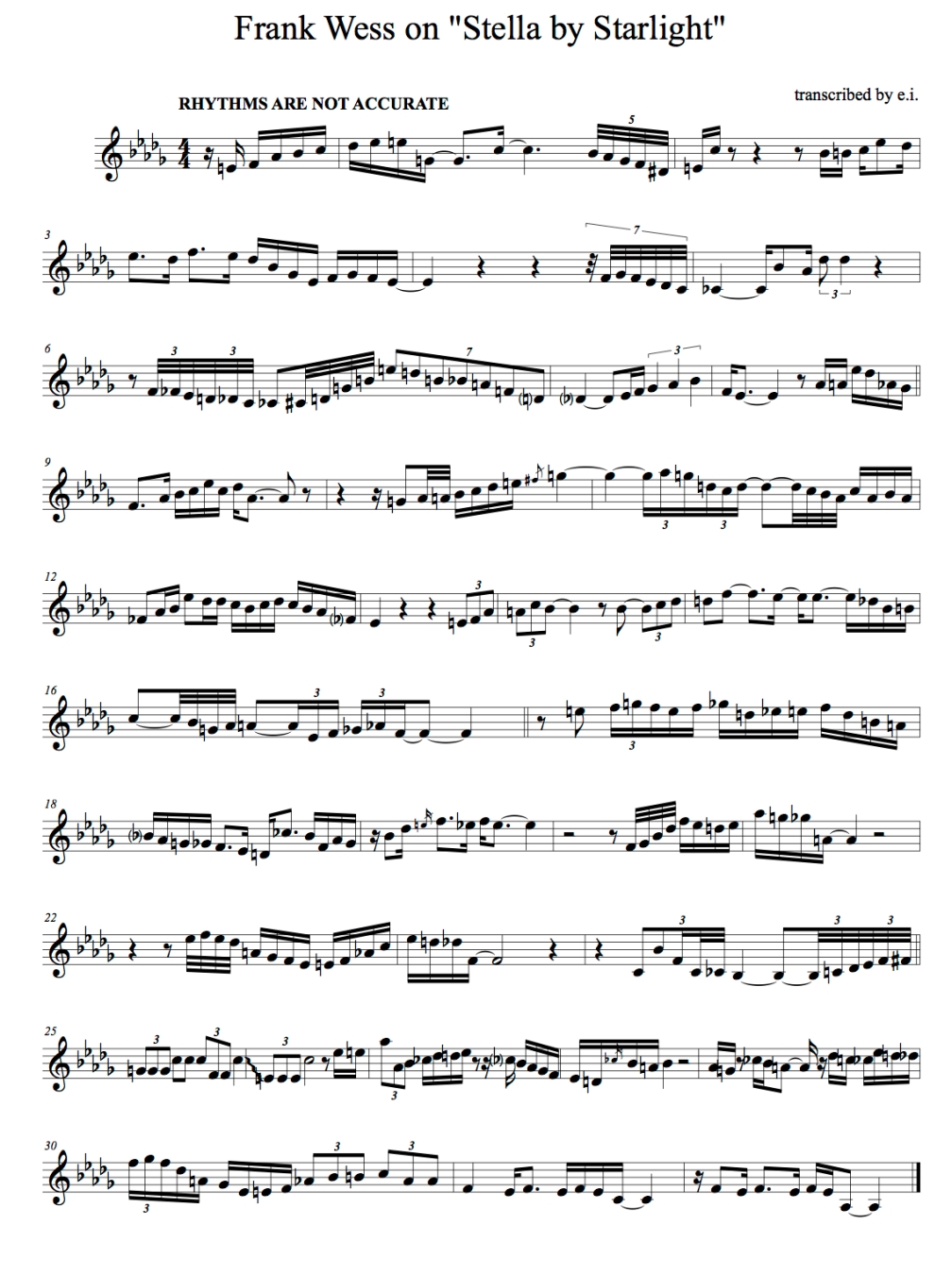 Hard to know what to say about Dwayne Burno passing at age 43 over the weekend.

I especially enjoyed Burno on a gig with Bill Stewart led by Pete Bernstein. Stewart is a wonderful, very correct drummer, and Burno sounded like a Jimmy Garrison-esque loose cannon next to him. It was a very hard-swinging gig that brought out the best in both the drummer and the bassist.

While I can’t say I knew Burno, I enjoyed a long talk with him in a pub basement in Edinburgh about a year and a half ago. The topic was mostly Buster Williams. Burno told me to get the late ’60s albums of Harold Mabern with Buster and Idris Muhammad. He was right, of course.