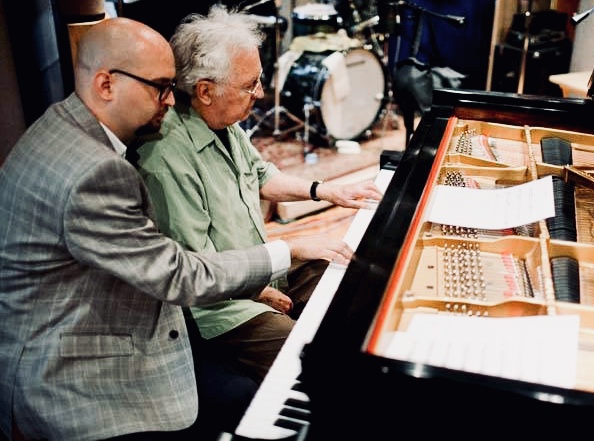 at the COSTUMES ARE MANDATORY session, photo by John Rogers

Lee Konitz passed yesterday yesterday at 92. A life well-lived! He was an innovator of American music, a conduit between the past and the future, an utterly distinctive stylist. He never compromised his art. In the last couple of decades Konitz was always surrounded by a youthful group of talented and respectful acolytes.

Konitz’s guru was Lennie Tristano. Shortly after the bebop of Charlie Parker and Dizzy Gillespie stunned the jazz world, Tristano supplied an esoteric alternative. Konitz and Warne Marsh were Tristano’s lead voices, and in some ways Konitz was the most obviously charismatic of all three, with sensational chops, a dry yet penetrating tone, and fresh ideas that just bubbled out of his alto saxophone.

Charlie Parker was so dominant that almost all musicians on any instrument copped some of Charlie Parker’s language. But Lee Konitz didn’t sound like Charlie Parker. I never once heard Konitz play one of Bird’s lines while improvising. Never.

To some extent, the Tristano school had self-imposed strictures about interacting with other musicians. Konitz broke those bonds and became an ambassador of the surreal. Important records by Claude Thornhill, Miles Davis, Gerry Mulligan, Chet Baker, Jimmy Giuffre, and others are graced with powerful and elliptical Konitz solos.

The cover of Sax of a Kind, a bootleg of early ’50s performances in Sweden, shows Konitz blowing with locals. The three other players on the cover are listening hard. I can feel the intensity of that musician concentration through the years and through the photo: They are onstage with the motherfucker! and yet are somewhat helpless! as Konitz rebuilds the logic of bebop from the ground up in every phrase!

Konitz’s own ’50s albums as a leader are full of stunning alto playing but in most cases, not all of the elements making up any given date are fully satisfactory. Eventually the stars aligned in 1961 for Konitz’s classic album Motion, where deliberately square Tristano bassist Sonny Dallas and polyrhythmic firebrand Elvin Jones give Konitz a unique carpet for some truly immortal performances.  After Charlie Parker, any list of the most studied and transcribed alto solos must include the original five tracks on Motion.  While Tristano and Marsh have become more common currency in recent years, at the time Motion was the undisputed “hit” of the whole Tristano school.

Motion was on a major label, Verve, and for a moment it seemed like Konitz was about to break through into a next level of stardom.

(That same year, Len Deighton was putting the finishing touches on The Ipcress File, which would be an international bestseller and then a major movie with Michael Caine. Deighton’s book includes the hardboiled riff:  “I chucked a pound note into the spilt drink and left without looking back. Lee Konitz moved into ‘Autumn in New York.’”)

However, Motion didn’t sell well to the general audience and the jazz industry was on the verge of a major contraction overall. Konitz’s brand of iconoclasm certainly wouldn’t make things any easier for his career. With the occasional exception — a late ‘70s Nonet is organized to the point of being over-arranged — Konitz decided to commit to the search, the new, and a platonic ideal of “pure improvisation.” Andy Hamilton’s book, Lee Konitz: Conversations on the Improviser’s Art, is good guide to Konitz’s philosophy.

Like a few others such as Steve Lacy, Paul Bley, Mal Waldron, and Anthony Braxton, Konitz’s discography exploded into hundreds if not thousands of albums in the 1970-2000 period. At times Konitz is overly restrained (the days of bubbling effortlessly appeared to be gone for good), while in some cases he plays in absolutely the wrong place (nobody could jump in, forcing “interaction,” on top of a piano solo quite like Lee Konitz). For every well-made album there are a dozen with shamefully low production values. But the best of it is great, and all of it is by definition unique. Konitz played with everybody, Braxton and Brubeck,  Barry Harris and Leroy Williams, ECM and Kenny Wheeler, the list goes on. (If you’re a good piano player and didn’t make a record with Konitz, you are almost the exception, not the rule.)

If I had to choose just one post-Motion Konitz disc I’d go for Paul Motian’s On Broadway Vol. 3 from 1991. There aren’t so many records from this era that are masterpieces at this level. (When you compare On Broadway Vol. 3 to the 1991 Keith Jarrett standards trio or the 1991 Charlie Haden Quartet West — two other bands that also simply “played tunes” — it confirms how advanced a conceptualist Motian really was.) The disc was recorded by Joe Ferla at Sigma Sound with a kind of flat, direct, “in your face” sonic image.  Konitz is wailing, perhaps being a little competitive with Joe Lovano. Charlie Haden and Bill Frisell also give their best, with each musical choice being another way to frame the two saxophonists in a fresh way. “I Wish I Knew” has Konitz extending arpeggios like a wild J.S. Bach behind Lovano; “How Deep is the Ocean” swings incredibly hard; a fast “Pennies from Heaven” is Tristano’s “Pennies in Minor” and fades out, just like a Tristano record from 1954.

Lee told me he hated the version of “Tico, Tico” he recorded with Paul Motian.

Lee was undoubtedly a contrarian, and I’m sure all of us acolytes have various stories where Lee acted in a confounding or even self-sabotaging way. It didn’t matter: We were still getting the real deal, genuine wisdom from a master.

My time with Lee was in 2011–2013, when he was 82–84. I took several lessons, bought him dozens of lunches, interviewed him twice, and, as a kind of final project, made a casual record, Costumes are Mandatory.

Among other things, Lee made me sing. I’m a terrible singer, I’ve always known this, and Lee assured me this was absolutely the case. (“Ethan, since you know so much about music, how is it possible that you sing so badly?”) But it became clear that Lee wasn’t gonna let up on me singing with the Louis Armstrong Hot Fives and Sevens. I had to do it, or else.

He was right. It changed my life. After a year of scatting with “Potato Head Blues,” “Struttin’ With Some Barbecue,” and especially “Muskrat Ramble,” I definitely learned something helpful about swing. I’m still working on it! But without Konitz’s guidance, I might have given up on it by now.

One of our interviews was for DTM about Lester Young. Now that Lee is gone, the greatest living authority on Pres is gone too.

The other interview was for JazzTimes; it’s more conventional but has some good things.  (Recently Bill Kirchner sent me a longer, excellent interview with Lee conducted during the same era that clears up several details in the historical record.)

Costumes are Mandatory is inessential overall but I like “Blueberry Ice Cream.”

To my mind, what made Lee so special was his command of the blues. He liked to tell us about singing the blues in front of a jump band as a teenager in Chicago. Apparently the many black teen girls in the audience would make fun of him for singing the blues, but: those same amused black girls danced to him anyway. That whole ’40s era — big band, dance, blues, a trajectory towards integration — came out Lee’s horn every time he played.

I loved that, so I wrote  “Blueberry Ice Cream” for him. Lee didn’t like the tune, of course, and refused to play the head for the record. But he took a few choruses of blues in A major with calmly swinging Larry Grenadier and Jorge Rossy.

Later on, Lee called me out of nowhere specifically to complain about how straight Larry and Jorge play on this track. He was wrong! Lee should have made dozens of bluesy records with immaculately swinging bass and drums and the very occasional spicy piano chord.  On “Blueberry Ice Cream” Lee sounds just like Louis Armstrong or Lester Young, except of course he sounds just like Lee Konitz as well. If everything I recorded was as successful as “Blueberry Ice Cream,” I’d be all set.

Lee Konitz touched a lot of lives in this music. No one expected him to live forever but his passing has weight. Those of us in this thing no longer have that chance to look in the eyes of someone who loved Charlie Parker so much that they would never dare to play a phrase stolen from Bird.

The David Adler obit for WBGO is excellent.