Marian McPartland: Well, how did you learn all the tunes? ‘Cause I know you know millions of tunes.

Teddy Wilson: Well I just generally in those days would keep up with ‘em as they…the radio was the big thing in those days, more than records, to establish new songs.

MM: And did you just learn them off the radio?

TW: Yes, or get sheet music from the music stores. I like to learn the songs from sheet music ‘cause I like to know exactly note-for-note the way the songwriter wrote it, with his bass notes, his original chords, and then make my changes from that foundation…There might be one bass note or one chord that the songwriter put in there that is just right for that situation. Better than any substitute chord. And that’s why I just like to check it out with the sheet music, even if I make the changes later.

Used sheet music and public library collections are cheap, wonderful, and under-utilized resources for learning songs. One might jump to the conclusion that using sheet music leads to more “accurate” or “authentic” performances. At the end of the day I’m still a jazz musician and, to a certain extent, happy to embrace the folk tradition of playing standards with others and compromise on the details. It seems likely that published sheet music played a larger part in the history of jazz than most are aware. In any case, accuracy or authenticity don’t really sum up my motivations. As a passionate song-lover, “treasure hunting” for brilliant little details in sheet music is a rewarding way that I celebrate great songs and composers. Here, let me show you! (Note: Sheet music chord symbols are often inaccurate so the excerpts are re-copied to make the chord symbols more accurate.)

Ship Without a Sail (1929) – Richard Rodgers and Lorenz Hart. This is an example of elegant and colorful inner voices. According to Alec Wilder the sheet music is “…as printed, one of the very best piano editions of a song I’ve ever seen.” With an opening two bars this good, Rodgers could’ve phoned in some run-of-the-mill tripe for the rest and it’d still be one of my favorite songs.

Come Rain or Come Shine (1946) – Harold Arlen and Johnny Mercer. An extremely rare example of a composed introduction in the sheet music that isn’t just the last four bars of the tune. This intro clearly establishes the original torch-song mood: “Slowly and very tenderly.” 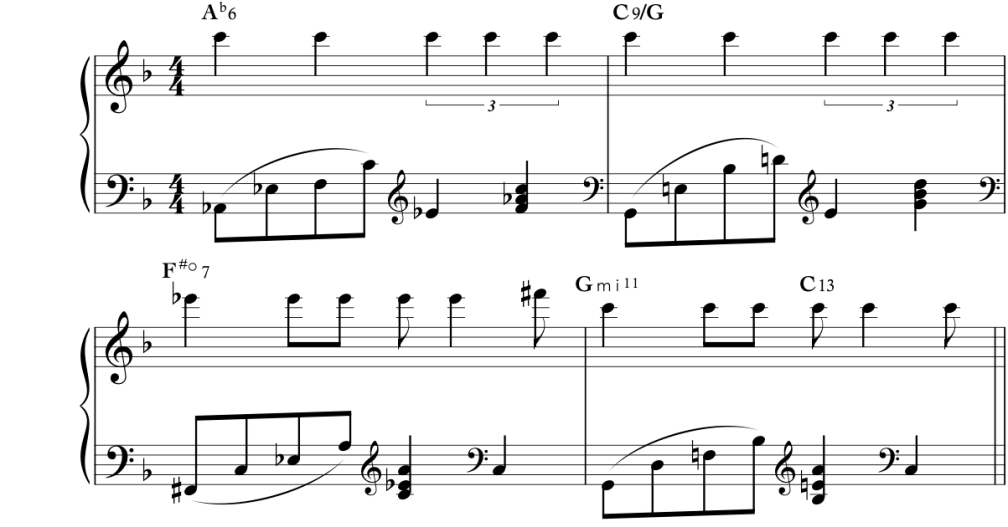 All Of Me (1931) – Gerald Marks and Seymour Simons. When you learn the correct melody for the last phrase of this song I doubt you will ever want to play it the other way. I rarely get worked up about these things… but the “not” in “why not take all of me” just HAS to be the flat 6 and the chord HAS to be a ii half diminished. Sorry for yelling.

Someday My Prince Will Come (1937) – Frank Churchill and Larry Morey. A similar case: on the line “wedding bells will ring” (the 4th bar of this excerpt), very few people play an F#, perhaps because the expectation is just a regular IV chord. Granted, “Gmi(MA7)/Bb” is a mouthful, but it’s such an exciting melodic moment with that huge major 7th leap down.

Liza (1929) – George Gershwin, Ira Gershwin, and Gus Kahn. The C7/G to Abmi6 is an example of a chord progression Teddy Wilson might call, “just right for that situation.” I’ll never forget the words of piano master and song expert David Boeddinghaus: “It’s hard to argue with George.”

Autumn Leaves (1945) – Joseph Kosma. The progression starting on A/C# in the last phrase is stark yet dramatic. First inversion major triads properly voiced without doubling the third can be so beautiful.

And there’s more! The sheet music has the lyrics, and also the too-often-ignored verses. In case you don’t know, old pop song verses are really introductions as opposed to verses in folk music or modern pop music where the same music repeats with different words each time. Verses can be trite or have little to no relationship to the rest of the song, but sometimes a verse creates an unbreakable marriage with the chorus and you never want to hear the song without it: “Autumn in New York” and “Pennies From Heaven” are good examples.

My interest in sheet music and the spirit in which I’ve discussed it was inspired by the most coveted text on my bookshelves: American Popular Song by Alec Wilder. 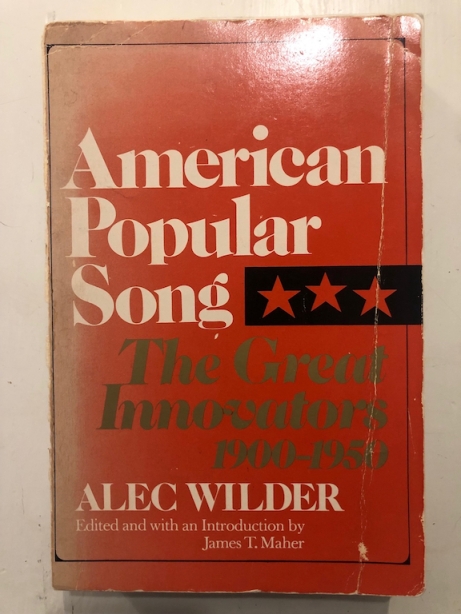 Few had wilder opinions than Wilder. As a composer/songwriter/scenester/non-jazz musician/iconoclast his perspective was truly one-of-a-kind. American Popular Song collects his poetic thought-provoking opinions on a vast number of songs. Whether you agree with him or not, the vitality of his writing is something to behold. Take for example his unsparing opinion of Sammy Fain’s “I’ll Be Seeing You”:

“I’m sorry to seem so unfeeling, but the music has never reached me. It seems boneless and insipid and written as if at an organ with the Vox Humana stop out. I simply don’t believe that the experience of writing it was one of deep involvement.”

Wilder used published sheet music almost exclusively to make his assessments. He paid little attention to lyrics, and rarely referenced recordings. His passion for the music always rang through as he described songs technically in terms of intervals, harmony, rhythm, and used musical excerpts to illustrate his ideas. “My Shining Hour” may have been his very favorite song: 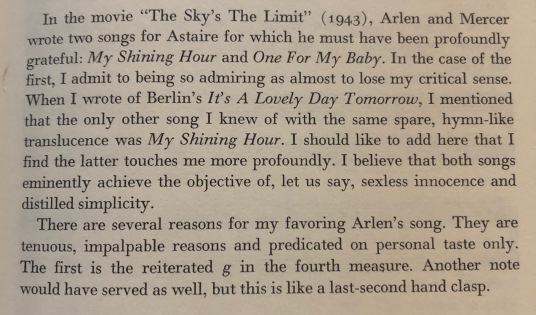 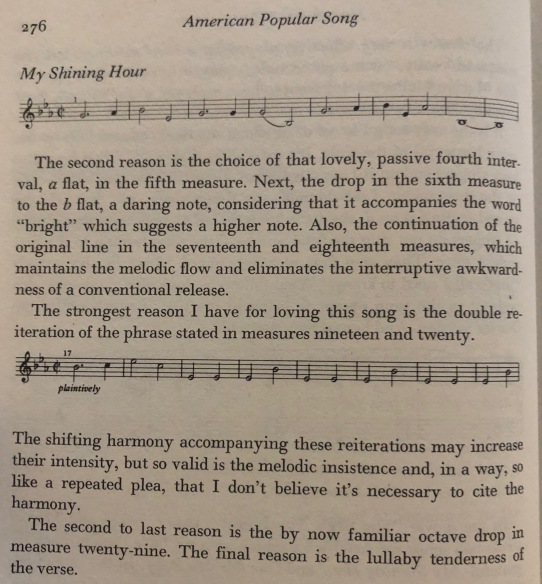 American Popular Song is worth hunting for, as are two valuable books by Dick Hyman, All the Right Changes and Professional Chord Changes and Substitutions.

Shout out to my friend Walter Rimler, a biographer of George Gershwin and Harold Arlen. Walter and his son Jesse hipped me to Wilder’s American Popular Song and started me out on a collection of Arlen sheet music.

In addition to the aforementioned David Boeddinghaus, pianists Peter Mintun and Michael Kanan are song authorities. Check out this great video of Kanan on playing sheet music harmony.

Big thanks to Casey MacGill and the Seattle Public Library for granting access to their incredible sheet music collections.

Thanks to Matt Weiner and Erica González for helping me write this.

Editor’s note: Last week I heard Fred Hersch perform “Moon and Sand” at the Village Vanguard. Fred has played that beautiful Alec Wilder ballad a lot over the years: indeed it leads off his very first record, Horizons. Wilder hung out at Bradley’s during the era Fred was working there and would give people his songbooks, which is how Fred learned “Moon and Sand,” simply by paging through the book. Fred’s recording came out a few months before the version by Keith Jarrett on Standards Vol. 2. I suspect Jarrett learned “Moon and Sand”  and “Blackberry Winter” — the first commonly heard recording of “Blackberry Winter” was Jarrett’s remarkable rendition on Bop-be — from the Wilder songbooks as well. Two more canonical jazz pianists with a close relationship to Wilder were Roland Hanna and Marian McPartland, who both recorded album-length tributes. — e.i.