During a recent trip to Washington, D.C., I went to the Library of Congress and tracked down the score to a favorite orchestral work. There are very few listings for Harold Shapero’s Credo online, so I was thrilled to find it the old-fashioned way: Using the card catalog in the reading room at the James Madison building.

Credo is strikingly beautiful, where the composer achieves vast depth of expression through minimal materials. I made a casual piano transcription to study it further. 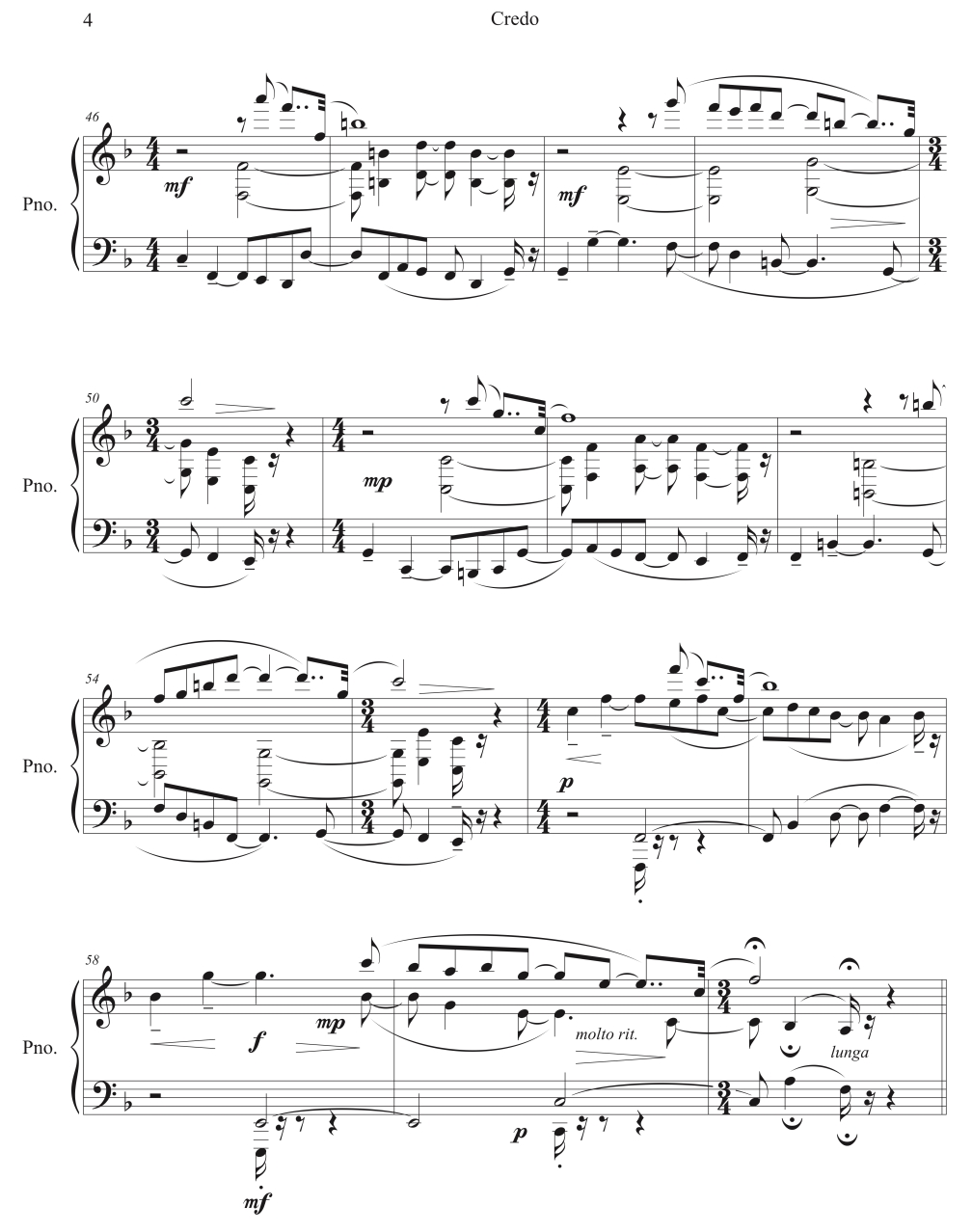 There are only 9 pitches: the F major scale plus an occasional B natural when the piece modulates from F to C. The harmonic content is lean, with dissonant intervals exploited in both wide and close spacing. As is common with American Neo-Classic works descended from Igor Stravinsky, Aaron Copland, and Nadia Boulanger, there are few full triads in Credo. (Usually just the dyad of tonic and third are considered “enough.”)  Shapero’s colorful orchestration does wonders for what is essentially three-part counterpoint.

Harold Shapero was born in 1920 and was prolific until about 1950. In his thirties his output slowed considerably. By the 1960s Shapero was still composing, but he rarely completed pieces, although a few works suddenly appeared towards the end of his life before he died in 2013 at the age of 93.

Not everything has been recorded. From what I’ve been able to find, I’d rank two other pieces in addition to Credo as authentic masterpieces, the Serenade in D for String Orchestra (later transcribed for string quintet) and the Three Amateur Sonatas for piano.

A chronology of Shapero on record:

String Trio (1937) Spiky and dissonant yet still attractive, influenced by his then-teacher Ersnt Krenek, an impressive work for a 17-year old.

Trumpet Sonata (1940) Two movements, slow-fast. It was the big-band era and Shapero played some jazz, so there are plunger effects in the opening chromatic song and ragtime syncopations in the allegro.

String Quartet (1941) Good piece, still somewhat in the Piston style; probably the earliest Shapero work that deserves an occasional hearing in concert. Some jazzers know about the first movement because one of the themes sounds just like Coltrane’s “Giant Steps.” The third movement, a grotesque march, is effective.

Sonata for Piano, Four Hands (1941) By this time Shapero had met Igor Stravinsky, and this four-hand sonata and the Violin Sonata just below are utterly “Stravinskian.” They are also influenced by the American originals Aaron Copland and Roy Harris. (However, for my money, Shapero has more contrapuntal skill than either Copland or Harris.)  Sonata for Piano, Four Hands is an excellent work, still very fresh, originally premiered by Shapero and his buddy Leonard Bernstein, and now a steady repertoire item for two-pianist teams.

Three Amateur Sonatas (1944) Inspired by Scarlatti and C.P.E. Bach, Shapero thins out his harmony. Suddenly, everything is done on a small scale, with every detail curated “just so,” and the result is both charming and profound. The first sonata in D remains a personal favorite, but all three are touched by genius. Michael Boriskin plays them superbly on a beloved CD of piano music by Shapero, Irving Fine, Carl Ruggles, and Gian Carlo Menotti.

The score is dedicated to Nadia Boulanger with whom I studied in 1941-42. I still remember the remarkable classes in which she performed the great Viennese string literature at the piano. She managed the most intricate string quartet passage-work in all details at the keyboard, and communicated the spirit of these works perhaps more precisely than string quartet players I have heard since then. The composition of my Serenade was greatly stimulated by these memorable experiences.

The humor of Haydn and the harmonic richness of Brahms oversee the Serenade. (“Serenade” is a Brahmsian title.) Five movements are made in perfect measure, resonant from top to bottom, with a mediant key sequence possibly original to Shapero: D major, F minor, D major, B-flat Minor, D major.  (The title of the fourth movement is another nod to Brahms, Intermezzo, although Shapero’s flexibility in 5/4 might have impressed the older composer). I’m pleased to own the original LP with Arthur Winograd conducting, which is hard to find but definitely worth the effort: the strings booming out from heavy midcentury vinyl on a decent sound system offers nothing but pleasure.  (The transfer of this classic LP on YouTube is a little thin and scratchy but better than nothing.) Shapero’s later transcription of the Serenade for string quintet, played beautifully by the Lydian String Quartet (Daniel Stepner and Judith Eissenberg, violinists; Mary Ruth Ray, violist; and Rhonda Rider, cellist, joined by bassist Edwin Barker) is readily available.

Noted critic Anthony Tommasini is sympathetic to Shapero. For a review of the Lydian Quartet’s CD in the New York Times, Tommasini wrote of the Serenade, “It is a work of such ingenuity and richness that it’s hard to understand why he did not become a giant of 20th-century American music….Mr. Shapero produced the version for string quintet recorded here to make the intricate inner voices and skittish rhythms more audible. The music, though as lucid as Haydn’s, has a modernist allure, stemming from Mr. Shapero’s daring manipulations of classical structures, full of abrupt turns and aborted gestures, and the intensity of his chromatic harmonic language. Yet for all its Neo-Classical niceties, the piece exudes a street-smart urbanity that is vintage Shapero.”

So far Shapero had modeled himself on Krenek, jazz, Piston, Stravinsky, Boulanger, Harris, Copland, Scarlatti, C.P.E. Bach, Haydn, and Brahms. For the next three pieces, Shapero takes on Beethoven.

Variations in C minor for Piano (1947)  A nearly-exact point between Beethoven’s C minor variations and the second movement of Op. 111, although the references are undone by cross-relations and a bit more dissonant harmony overall.

Symphony for Classical Orchestra (1947) Many (including Tommasini) hail this large-scale symphony as Shapero’s masterpiece. Few pieces from this era have had such a cycle of birth and re-birth: Originally there were performances by George Szell and Bernstein (who recorded it) before being forgotten; Andre Previn rediscovered it and recorded it in the mid-80s; eventually it was the focus of the Shapero obits in 2013. Between the two recordings I give Previn the edge (although the Bernstein is good too). My favorite movement is the finale, which has extraordinary contrapuntal design, hilarious harmonic puns, and irresistible momentum.

Piano Sonata in F Minor (1948)  While the last movement begins with a moment of striking pianistic inspiration, the rest of the sonata is over-burdened by explicit references to Beethoven’s Appassionata sonata. In general the three “Beethoven” Shapero pieces, the two solo piano works and the Symphony, are a bit square compared to the less predictable phrasing offered by the three Amateur Sonatas and the Serenade. (Many Shapero commentators love Shapero’s “Beethoven” music, so perhaps I am missing something. The door is left open for a future date where I more willingly accept the “profundities” these works have on offer.) No complaints about the excellent recording of the piano pieces by Sally Pinkas, who also plays the Sonata for Piano, Four Hands with Evan Hirsch.

Credo for Orchestra (1955) The profundity Shapero seeks in his “Ariso” movement from the F minor sonata would arrive a few years later. Credo is a valediction, a perfect synthesis of a style and era, yet also a composition unlike any other. Indeed, for the first time, I’m at loss to find a model in a Shapero work, unless the model for Credo is perhaps something quite a bit older, like plainchant or another religious music.  At any rate, that wonderfully charismatic sound of American mid-century composition is still very much present. Indeed, one might think Credo could take up some of the weight constantly borne by Barber’s Adagio for Strings and Copland’s Fanfare for the Common Man when this kind of reference is required in popular culture.

It all led to this point, and then…?

In the Shapero literature it is argued that his voice was muted by the incoming post-war serialists. This makes sense, but there must have been other reasons as well, for the rest of Shapero’s music (or at least what can be found on commercial recorded issue) simply isn’t as good.

“On Green Mountain” for Jazz Ensemble (1957) This Monteverdi arrangement (Monterverdi = “Green Mountain,” get it?) was part of Gunther Schuller’s grand scheme of Third Stream Jazz. It was the first Shapero I heard many years ago, and I promptly wrote him off as a composer for years, it was such a misguided use of forces. Art Farmer is heroic as the trumpet soloist.

Partita in C for Piano and Small Orchestra (1960) Another challenging listen, at first blush relentlessly obvious and undercooked. The stylistic anachronisms and repetitive patterns foreshadow the ironies of Alfred Schnittke, although Schnittke would have offered a far more secure hand on the tiller, at the least by including more deranged textures as a way to let the audience in on the joke. Admittedly, the performance on the old recording is notably poor.

Six for Five for Wind Quintet (1995) Only three movements of the six were released on the anthology Americans in Rome. Small scale and charming, almost as if Richard Rodgers were writing for wind quintet. I’d like to hear the whole piece, and for that matter, would like to hear the rest of Shapero’s late output, which includes a Trumpet Concerto and a set of Bagatelles for piano.