Sorry to hear of the passing of Mr. Ben Riley, one of the all-time great modern jazz drummers.

While Riley might remain best-known for his 60’s association with Thelonious Monk, he played with almost everybody else as well. The Sonny Rollins Bridge sessions are famous, but the drumming is just as good on early discs with Eddie “Lockjaw” Davis and/or Johnny Griffin. In the 70s he became Ron Carter’s drummer for a quartet that played everywhere. Ron was on piccolo bass, Buster Williams and Kenny Barron rounded out the group. Barron, Buster and Ben became a kind of “three B’s” that were on countless top-shelf gigs and records from the later 70s and 80s. Eventually they become the core of the wonderful co-operative Sphere with first Charlie Rouse and then Gary Bartz. My pick of Sphere’s discs might be the sensationally swinging On Tour (1985). A good place to hear the three B’s without horns is Barron’s Green Chimneys (1983).

Riley was a bebop drummer. Well, I can write that, but what does that really mean?

I always liked Riley, of course, but my love and admiration skyrocketed a few years ago when fooling around with the 1976 Jamey Aebersold Charlie Parker play-along. With Kenny Barron’s channel turned off I heard Riley more clearly than ever before. “Anthropology” is quite brisk, indeed it seems like Mr. Ron Carter might be hearing the time a shade faster than Riley. Riley sits right there on that superb spang-a-lang. It is just slow enough that the swing must still be articulated. Rock and roll drummers can’t do this, they can’t keep a triplet skip-beat at this tempo, only jazz professionals can. Riley holds the tempo, unbothered by Ron but — crucially — not ignoring him either. He’s listening and not gripping the time, simply radiating swing. Nasheet Waits told me, “Ben Riley was always looking out.”

All this ride cymbal magic is just par for the course. If you are bebop drummer, you do this every day, every gig, all the time, forever. Hyland Harris has a phrase, “They were titans.”

I knew Riley’s ride cymbal was mystical wonder, but what really forcibly struck me while playing along was Riley’s left hand. It’s mysterious. The clave sentences are not what I expected. He starts the second chorus (where the blowing and Ron’s indomitable walking begin) with a quarter-note cross-stick on the downbeat. A starting gun? Fine, but…how dare he? On the downbeat? Then the marvelous snare commentary that follows is just sort of in the middle of things, entirely unpredictable and entirely juicy. 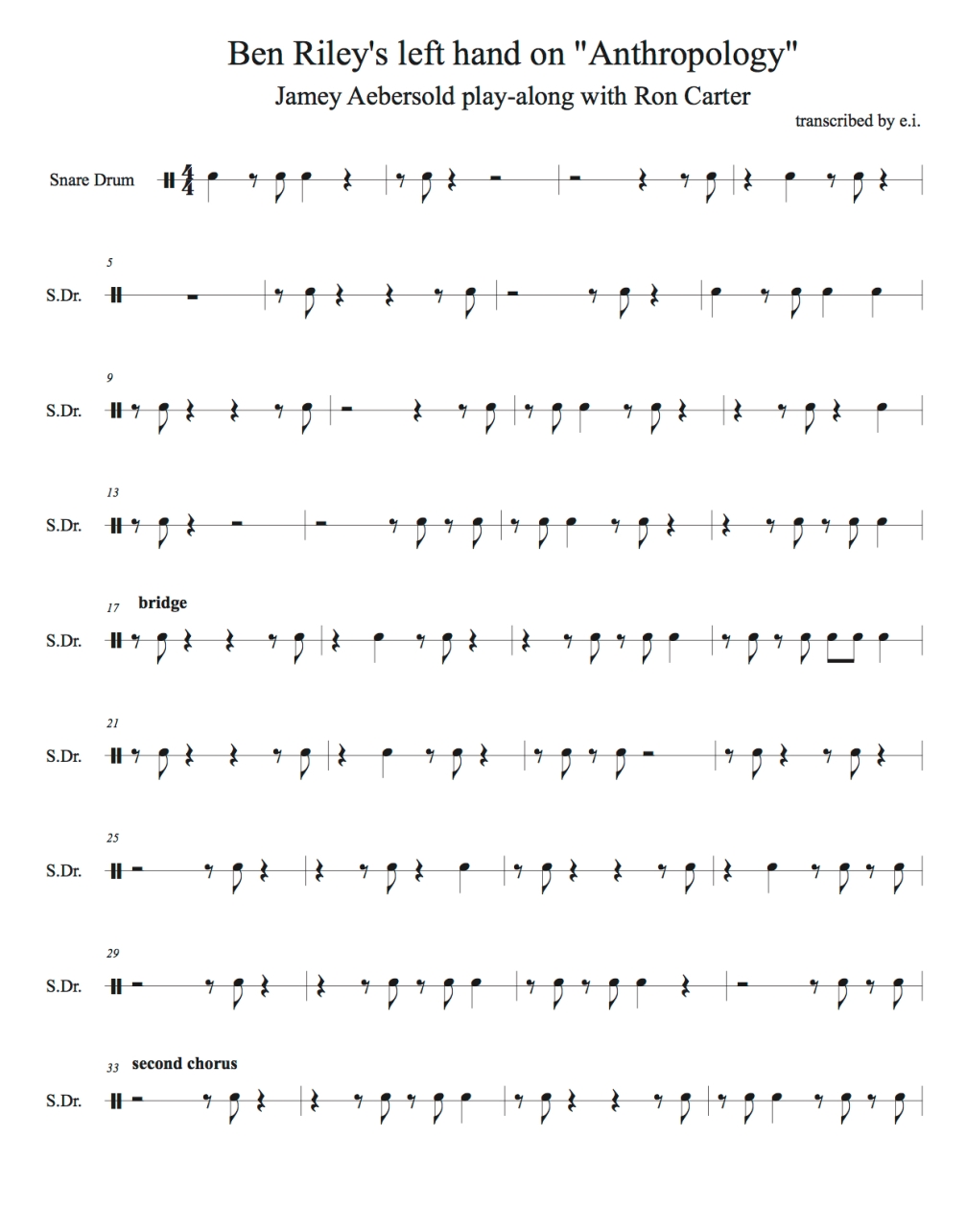 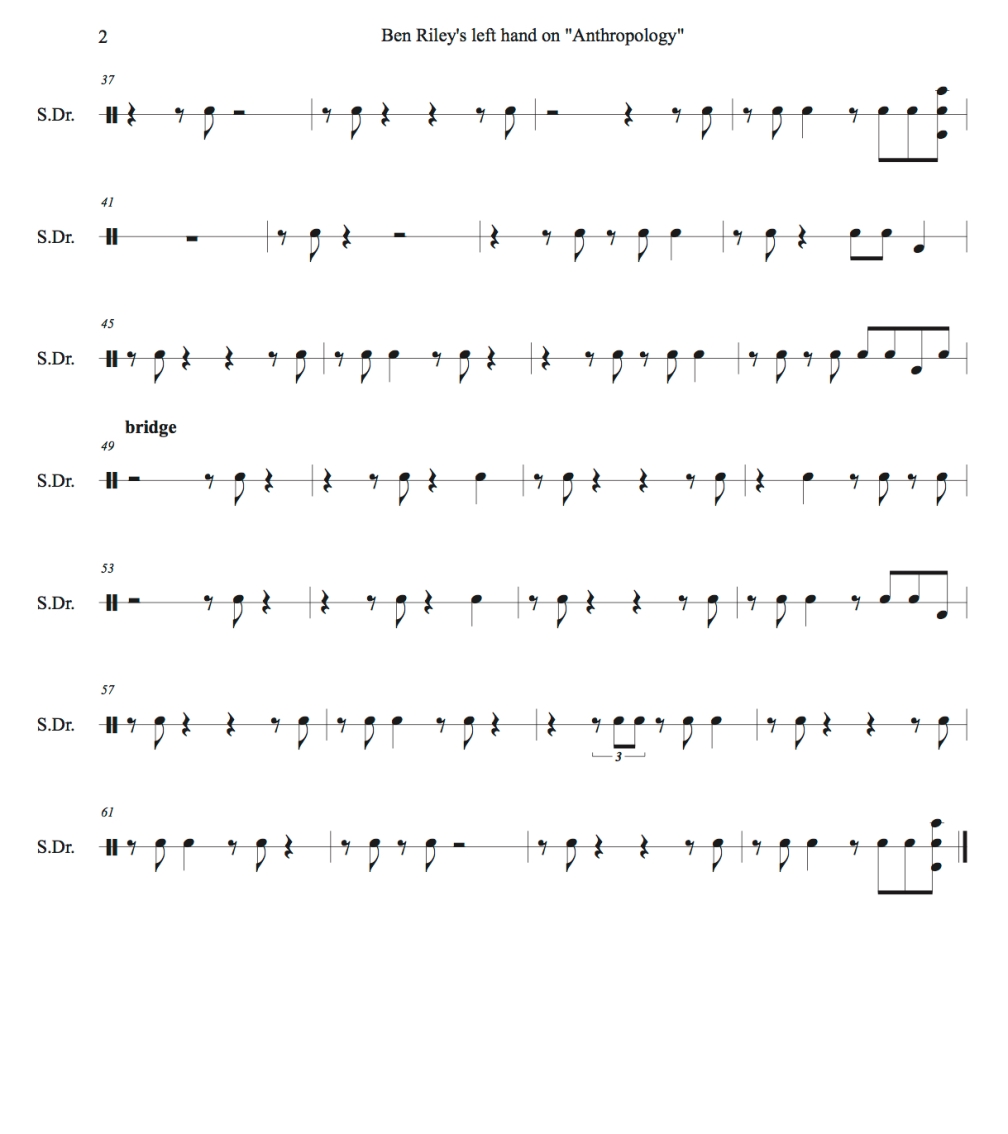 [Note: my transcription is not that accurate, it’s still hard to hear and many ghosted notes aren’t notated.]

Obviously, the left hand is actually supposed to be interacting with an experienced bebop soloist. After spending time with the left hand in isolation one might hear how Riley functions in a group a bit better. Two other classic bop records that have unusually rarified qualities are Hank Jones’s Bop Redux with George Duvivier (1977) and the Charles Davis/Barry Harris quartet with Peter Washington, Reflections (1990). (There is extraordinary pure jazz from this era if you know where to look.)

Riley was versatile, he didn’t just play straight-ahead jazz and bebop. The late Andrew Hill records with Riley are wonderful, I especially love Shades with Clifford Jordan and Rufus Reid (1986). There’s even an interesting Horace Tapscott trio with Fred Hopkins (1984). From a bit earlier, Riley is a grounding presence on Alice Coltrane’s wonderful Ptah, the El Daoud (1970).

And he was especially good with Abdullah Ibrahim on the stellar LP Water from an Ancient Well (1985). The other musicians are Dick Griffin, Carlos Ward (fl), Ricky Ford, Charles Davis, and David Williams. The title track offers a really soulful mood:

On both these long studio “even eighth” tracks Riley never falters. He is always present, taking note, unrolling a perfect funky carpet.

I exchanged notes with Victor Lewis today. “Sorry to hear about Ben Riley,” I wrote. Victor replied, “I’m looking to the sky in tribute!”