I don’t envy jazz critics making their top ten lists. There are so many worthy records seemingly released every week, not to mention competition from the grave. (If anyone just puts down John Coltrane Offering: Live at Temple University and calls it a day I understand.)

One to consider, if you haven’t heard it already, is Sam Newsome’s Straight Horn of Africa: Path to Liberation. I know some of these these themes from Sam’s solo concerts and it is cool to have them fleshed out into overdubbed fantasias.

Sam has a very interesting mind. As much as I recommend the CD, I recommend the accompanying essay even more.  It can be purchased for $.99 at the Amazon Kindle store, and you won’t spend a dollar a better way today.

I see Adolphe Sax’s invention of the saxophone in 1846 as innovation; however, I see the musical vision of Charlie Parker and John Coltrane for the saxophone as liberation.

Sam offers a fascinating take on race and jazz. He’s hinted at this topic on his blog before, but he goes all in for this essay. I support his conception 100%. Check it out.

For free, try his latest post on Soprano Sax Talk, his comparison of Steve Lacy and Branford Marsalis on “Who Needs It.”

OK, new Star Wars. I give this a big “what-evs,” as everyone knows my childhood passion was its then minor UK competitor Doctor Who. However the trailer’s release prompted the excavation of Samuel Delany’s fascinating review of the original movie in 1977. Delany loves it except for the all-white, all-male future. 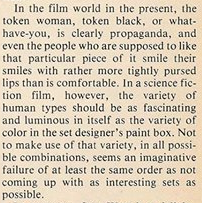 I was intrigued that Jar Jar Binks was a race flashpoint in the “prequels,” now I’m even more thrilled that so many are watching the franchise to see what happens with the forthcoming trilogy.

The Star Wars stuff ties into something I noticed in my recent perusal of apocalyptic fiction. Pim van Tol gave me Nevil Shute’s On the Beach, which somehow I’d never read. It remains intensely moving; however the local politics drove me crazy, especially from a feminist perspective.

Much better is Max Brooks’s recent World War Z. I loved this book! It has nothing to do with the Brad Pitt action movie, but instead is a literary tour de force combining Studs Terkel-style oral history with world geopolitcs in the aftermath of a zombie outbreak. It’s not that Brooks is so politically correct – he’s a white guy mostly writing about what he knows – but he understands that diverse voices need to be included simply to make the story more interesting.

World War Z is now part of a quartet of Iverson picks where worldbuilding novelists explain how we live now: the other three are William Gibson Neuromancer, Neal Stephenson Snow Crash, and Ernest Cline Ready Player One.